Along Came Molly: “She’s Out of My League” is Only a 5 Compared to Apatow’s Comedy Classics 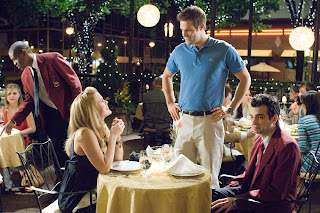 The 40 Year-Old Virgin. Knocked Up. Superbad. Forgetting Sarah Marshall. Walk Hard. Step Brothers. Pineapple Express. What do all of these films have in common? They are all produced and/or directed by Judd Apatow. He’s today’s go to guy for quality comedies. What else do they have in common? They are all significantly better than “She’s Out of My League.” If “Knocked Up” were the hot girl with a perfect bod, then “She’s Out of My League” is the nerdy guy with skinny arms and bad hair. That isn’t to say this film is horrendous, because it isn’t, but it’s easily not as good in quality or importance as any of the above films I’ve mentioned. Not surprisingly, Apatow had nothing to do with this one, so we can blissfully shrug this one off as an “Apatow wannabe.” Of course, not all Apatow wannabes are bad, just take a look at the terrific “I Love You, Man” for instance. And after all, “She’s Out of My League” is really the only pure comedy I’ve seen since Ricky Gervais’ “The Invention of Lying” from way back in October. So seeing as though there’s no real competition, you could do a lot worse than this movie.

We get “Knocked Up’s” Jay Baruchel in his first staring role as Kirk. Kirk is a goofy, scrawny guy who works as a security guard at a Pittsburgh airport. So do all his male buddies. Note to self: never get on a plane in this airport. These guys spend more time checking out girls than screening passengers. I’m surprised more terrorist attacks didn’t occur in this film. But I digress. A hot girl comes through security, accidentally leaves her iPhone, which Kirk holds onto until she can return to claim it. It turns out this hot girl named Molly (Alice Eve) is not only nice on the outside, she’s nice on the inside, and decides to give dating Kirk a try. Kirk’s goofball friends, not surprisingly, are shocked that someone like Molly (whom they dub a “hard 10”) would even consider going out with a guy like Kirk (whom they dub a “5”). I’m not really sure who made these classifications, but they seem to have a firm grasp on it. [that’s what she said]

It turns out Molly is actually interested in Kirk precisely because he is a 5. But she knows that he’s actually a 10 on the inside, and she’s only used to guys who are 10s on the outside but only 5s on the inside. This includes her ex-boyfriend/pilot Cam (Geoff Stults) who is as All-American as they come. Even Molly’s more traditional parents are sort of shocked by Molly’s new dating choice. Kirk’s family is very different from Molly’s parents in that they are the super weird parents we usually find in movies like this. Kirk’s dad’s eyes nearly bug out his head when he first sees Molly and Kirk’s mother squeals with delight because her son has snatched such a hottie. And it turns out that Kirk’s parents have taken a likening to Kirk’s ex-girlfriend Marnie and her new boyfriend. They hang out a lot and it’s certainly awkward. And Kirk’s douchey brother Dylan is everything obnoxious brothers are supposed to be.

I guess what seems to be the film’s biggest problem is a lack of extremely funny and witty writing. This is supposed to be comedy’s most important thing of course, because without funny writing there is no funny movie. I chuckled at parts and was entertained the whole way through, but some story elements just felt stale. It’s as if the writers (Sean Anders & John Morris) just got bored half way through writing the script. They come up with a few gross out situations, because movies like these need to have these moments, which include the removal of body hair and a certain bodily fluid. The film isn’t too shameless though and I’m glad to say and these scenes are decently brief.

I found myself rooting for Kirk, for some reason, even though I pretty much knew how things were going to play out. I enjoyed Molly’s droll best friend played by Krysten Ritter; I hope we get to see more of her at some point. Kirk’s three best buds are pretty forgettable and don’t add anything fresh or new to the proceedings. Although I’m glad Molly is as nice as she appears to be and you come to find out it’s not so shocking that she would go for someone like Kirk. “She’s Out of My League” is not a fantastic film, it certainly has its issues, and it’s nowhere near as good as some other comedies that have come out in the past few years, but you could do a lot worse. GRADE: C+

I have been absent for a while, but now I remember why I used to love this blog.

Thank you, I will try and check back more frequently.
How frequently you update your site?

Hello there! This post could not be written any better! Reading this post reminds me of my old room mate!
He always kept chatting about this. I will forward this article to him.
Pretty sure he will have a good read. Thank you for sharing!