Insane in the Membrane: A Virus Turns the Local Townsfolk into “The Crazies” 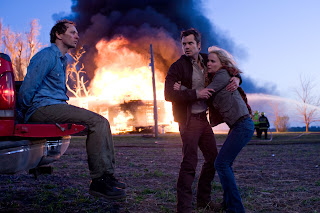 If you go see “The Crazies” you should probably be forewarned that you’ve probably seen it before. Most likely you haven’t watched the little seen original film directed by George A. Romero. In fact, I had never even heard of it until this remake was scheduled for release. No, you’ve probably seen a lot of it before in other movies like “Dawn of the Dead,” “28 Days Later,” heck even “Zombieland.” The zombie film has sort of become an unfortunate retread in the horror genre as of late, because everyone seems to be making them. However, even though The Crazies doesn’t necessarily reinvent the genre, it certainly is one of the better ones and is worth seeking out.

“The Crazies” takes place in the little town of Ogden Marsh, Iowa. It’s a quite Midwest town where nothing much happens. It seems like the most exciting event is a local high school baseball game. An elderly man wanders into the outfield with a shot gun and the local sheriff David Dutton (Timothy Olyphant) is forced to shoot, and kill, the man when he ignores his orders to put down his weapon. The man’s wife and son are devastated, but David insures him it was for his own protection as the man was acting very strangely. It turns out he’s not the only one as it’s soon discovered that several of the townspeople begin acting crazy and become extremely violent. It turns out the local water supply has been contaminated by a virus. The origins of it I will not expose here, but those conspiracy theorists will most likely be overjoyed.

Soon David is on the run with his pregnant wife Judy (Radha Mitchell) and his deputy Russell (Joe Anderson) from these “crazies.” While in most zombie films the infected are violent and mindless. Except here it seems like those infected know exactly what they’re doing even though they are pretty much insane. And yes they are extremely violent. One infected man even locks his wife and son in a closet and sets the whole thing ablaze.

I was actually genuinely surprised at how much I found myself caring for the characters. Olyphant and Mitchell actually have good chemistry and are well matched as young soon-to-be parents. The movie is pretty relentless, barely giving you much time to breath between several tension filled sequences. Look at one scene in which Judy is strapped to a gurney. She can’t move from the bed at all. An infected man slowly approaches her, dragging a bloody pitchfork on the floor behind him. It’s pretty suspenseful stuff as long as you don’t expect the main character to be killed off so soon.

There is some really good stuff to be found here and it’s all filmed in an appropriately dark and gritty tone. I can assume the original film, being a Romero movie, to have a very low budget quality, and while this remake is no slick piece of filmmaking, it is appropriately low budget looking and yet never ever feels cheap. It’s director who last made the big budge adventure film “Sahara” seems much more suited to this genre as is writer Scott Kosar who gave us The Machinist and The Texas Chainsaw Massacre remake.

Like I said the film’s biggest drawback is the fact that there are dozens of films like it out there that you’ve probably already seen. “The Crazies” should please fans of the genre who aren’t already sick of it. I guess I’m sort of one of them, I think we should take a break from all these zombie movies; it’s enough to drive you crazy. GRADE: B