The Magic Kingdom: Tim Burton Brings Us Down the Rabbit Hole in the Uneven “Alice in Wonderland” 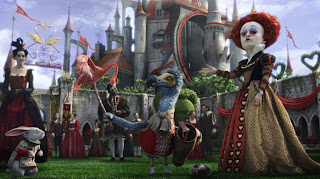 I am a big fan of Tim Burton’s movies. And for once, I finally understand why most critics have mixed feelings about his films. Many tend to lean towards the camp of Burton being a great visionary with wild and exotic locations, costumes with quirky and original characters. A lot of the time all of this stuff gets bogged down with weak story elements and unnecessary plot developments or characterizations. Sometimes when he makes a film with a character in the title, he spends more time on secondary characters (Batman Returns for instance). Which brings me to his version of “Alice in Wonderland.” It’s a beautiful film with outstanding production design (mostly computer generated but lovely nonetheless) and other simply scrumptious visuals. But there’s something about this story that sort of just didn’t work for me.

Being a film called “Alice in Wonderland” I expect this film to be about a young girl who wanders off into a magical land full of talking animals, smoking caterpillars and an evil queen whose idea of recreational activities include public beheadings. What we get in this new version is more of a sequel with Alice now being a 19 year old young woman who has already visited Wonderland but doesn’t remember actually having been there. Sort of lame if you ask me. The film is written by Linda Woolverton who worked her magic on the scripts for Disney’s “Beauty & the Beast” and “The Lion King.” I appreciate the attempt to rework what everyone already knows about Wonderland and turn it into a new story, but then rename the film something along the lines of “Return to Wonderland.”

Having put all of that aside, there are definitely elements I enjoyed here. We have newcomer Mia Wasikowska as Alice, who gives a good performance, however she’s upstaged by two of her other female actors. We have Helena Bonham Carter as the Red Queen, who has a huge head and a tiny body which looks odd at first, but comes directly from Burton’s wonderfully warped mind. And the other is the White Queen played terrifically by Anne Hathaway. She has an Amy Adams in Enchanged quality which reminded me of a super angelic version of Glinda the Good Witch of the North. Lots of laughs to be had at watching Hathaway’s engaging performance.

There are other familiar characters we meet along the way, but because this is more like a sequel it’s feels like we should have already been introduced to these characters. This includes Johnny Depp’s hammy version the Mad Hatter, Alan Rickman as the toked-up Caterpillar, Steven Fry as the Cheshire Cat, and Matt Lucas as both Tweetledee and Tweetledum and Michael Sheen as the White Rabbit. In fact there are so many other characters, you don’t get much time to get to know much about them. And there is so much here plot wise about saving Wonderland from the Red Queen that to be quite honest, I didn’t find myself caring much about the fate of any of these beings.

I don’t have too much to say about seeing the film in 3D, but it didn’t really need it. I guess I like my 3D with extra cheese. Throw stuff at me and remind me that I’m watching a 3D film. 3D has the power to full engulf you in a movie experience (like the breathtaking “Avatar)” but here it just seems like a way for Disney to wring more money out of you.

I can’t really call myself an “Alice in Wonderland” purist because I haven’t read the books and my knowledge basically lies in what I’ve seen in the 1951 Disney cartoon, but something about Tim Burton’s version just was slightly off for me. It has some great performances and a majestic look with the usual Burton quirkiness and very good visual effects, but I’m not sure I’d want to stumble down this rabbit hole again anytime soon. GRADE: B-

Hi I am so excited I found your webpage, I really found you by accident, while I was browsing on Askjeeve
for something else, Nonetheless I am here now and would just like to say
many thanks for a marvelous post and a all round exciting blog (I
also love the theme/design), I don’t have time to go through
it all at the minute but I have bookmarked it and also included your RSS feeds,
so when I have time I will be back to read more, Please do keep
up the excellent work.