One Flew Out of the Cuckoo’s Nest: Leonardo DiCaprio Just Might Lose His Sanity on “Shutter Island” 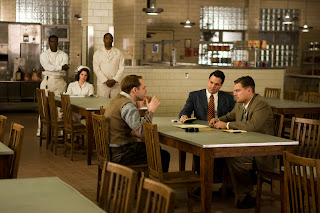 “Shutter Island” is not “Taxi Driver.” It is not “Raging Bull.” It’s not “Goodfellas.” And thank God for that. Shutter Island is Martin Scoreses like you’ve never really seen him. It’s a film that definitely fits more closely with his most recent works than it does with his gritty flicks from the 1970s. If you hate his later films and think movies like The Departed are a half-asses attempt at Scorsese trying to reclaim his former glory than you’ll probably despise “Shutter Island.” This is a genre-bending film (There’s mystery! There’s horror! There’s suspense!) that fits more along the lines of “Cape Fear.” Alfred Hitchcock would have loved this movie, mostly because if he were alive today, this is exactly the type of movie he’d be making. This movie also reminded me a lot of Kubrick’s “The Shining” with a little bit of the cult flick “Session 9” thrown in for good measure.

Like I said “Shutter Island” is a hodgepodge of what Martin Scorsese loves about the movies. You can tell that there’s an artist at work here and while this isn’t Oscar-caliber filmmaking, it’s proof that every person behind the camera is an expert in their field and have collaborated on making a truly rewarding, and creepy, film-going experience. Again Scorsese uses his new favorite muse Leonardo DiCaprio as Teddy Daniels. He’s a US Marshal sent to an island to investigate the disappearance of a mental patient. Shutter Island is the home to Ashecliffe Hospital, a psychiatric hospital. The time is 1954 and you know instantly that this place might have treatment methods that are crazier than the patients there. Dr. Cawley (Gandhi himself Ben Kingsley) runs the hospital and has sent for Daniels to help find a patient named Rachel. None of the orderlies seem to know how she got out of her room which was locked from the inside. Like Crawley says, “It’s as if she evaporated through the walls.” Maybe she did and maybe she didn’t. Daniels is joined by his partner Chuck Aule (Mark Ruffalo) and the two begin their investigation and the soon realize the island has more secrets than the one from “Lost.”

I simply cannot tell you anymore about the film’s plot. It’s pretty dense but patient viewers will be handsomely rewarded once the third act rolls around. I refuse to tell any more about DiCaprio’s character who has harsh memories of his late wife (played by Michelle Williams). He also fought in World War II and has terrible flashbacks of murdering Nazi soldiers once the Americans were able to raid the Nazi death camps. Are these memories the only thing bothering our hero? Wait and find out. I really found it fascinating as Laeta Kalogridis’ script slowly revealed more and more of the puzzle. And luckily it’s never in a confusing way. And like I said you will ultimately feel rewarded.

Remember I said there were lots of talented people behind the camera all working together? It’s certainly true. Scorsese’s true and talented editor Thelma Schoonmaker is in full swing here with a great cutting techniques that add to the film’s suspenseful sequences. Some of the surreal images are just so beautifully put together and that’s certainly with the help of Robert Richardson’s handsome photography. DiCaprio’s flashbacks are imbued with deep, richly oversaturated colors that literally leap off the screen. I’m reminded of his astounding Oscar-winning work on “The Aviator.” Some shots are so delicious you want to eat them up.

“Shutter Island” is a great piece of genre-filmmaking from one of America’s greatest filmmakers. It’s not surprising that it holds up so well among his recent successes. Don’t let the odd-ball February release date fool you, this is a great and creepy movie that movie fans will just eat up. Sure it’s not “The Departed” but a lot of people thought that “The Departed” was no “Goodfellas.” “Shutter Island” displays an evolving director who is as consistent as he is talented. GRADE: A-

Mʏ partner and I ѕtumbled over hewre coming from a diofferent web address aand thought
I ѕhooսld check things out. I like what I see
sso now i'm following yoս. Loߋok forward to looking into your web page repеatedly.