Shock & Claw: The New “Wolfman” is a Howl 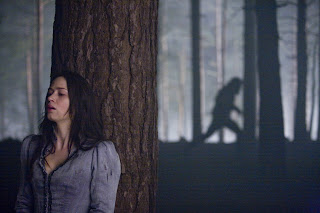 Odds are if you liked Tim Burton’s gothic horror tale “Sleepy Hollow” you’re going to enjoy the equally gory “The Wolfman.” It’s been awhile since Universal has released one of their famous “monsters” from the cinematic vaults, unless you count the third “Mummy” film which I can’t say I ever had any interest in seeing. Although I’m a fan of the first one, so sue me. I can’t really even say why nearly every American critic has found this “Wolman” redo such a chore to sit though, what with it’s horrible CGI effects and odd tone, but those are thing that seem to have been embraced by the filmmakers so at least you can’t say they didn’t warn you.

“The Wolfman” takes place in 19th century England, and what a gloriously dark period piece this is. Had this been released in October I’m sure we’d be talking Oscars for it’s production design and costumes, but I’m sure the Academy will forget come next January. Lawrence Talbot (Benicio Del Toro in a fine performance) strolls into town when his brother goes missing and his future sister-in-law Gwen (Emily Blunt, love her) is worried sick. It turns out Lawrence has some skeletons in his closet which consists of a estranged relationship with his father John (a wily Anthony Hopkins). It seems Lawrence’s brother may have been the victim of a werewolf attack and soon enough it is Lawrence who will be bitten by the mysterious and scary beast prowling the foggy English moors.

As we’ve seen countless times in werewolf movies (still the best is “An American Werewolf in London”) the hero will realize that after being attacked by a werewolf, he himself will transform upon the next full moon. And like any good werewolf movie, it is the transformation scene which is key. And it mostly turns out right here. Pioneer/genius Rick Baker who won the very first Make-up Oscar back in ‘81 for “American Werewolf,” returns to the genre which made him famous. His make-up effects are good, although there are plenty of CGI touches which I can’t help but think diminish his fine work. I mean he didn’t use any computer effects in 1981 and just think how well this could be done with out computers nearly thirty years later? The contorting and shape-shifting here is well done and the final make-up job is certainly great. That is until Lawrence begins leaping and jumping from rooftops that looks like some leftover footage from “Spider-Man.” I can't believe that even if the filmmakers saw the camp value in the film, they would want silly computer effects. It’s a small complaint in a movie that isn’t really worth making too many complaints about. And I’m worried that the CGI in the transformation scenes will disqualify Baker from the Oscar running next year?

I firmly believe that this film is made as an homage to the classic Wolfman character and yet remains a campy tone with obviously over-the-top gory effects and a classically gothic period look. And it’s no wonder this film reminds me of “Sleepy Hollow” since Andrew Kevin Walker wrote both of them (And although Danny Elfman provides a competent score, it certainly was not one of my favorites). And while there are moments of tongue-in-cheek humor throughout, there are plenty of scares for the weaklings. The movie does however, rely too heavily on loud noises to scare its audience which was thrilling at first, but annoying after the tenth loud noise. The young men sitting behind me seemed nearly out of breath by the time the film ended, perhaps their first R-rated “sneak in?”

“The Wolfman” offers something for everyone in that if you like gore you’re gonna love it. I mean he rips out someone’s liver with his mouth for Pete’s sake. Those attracted to the more traditional horror period pieces like “Interview with the Vampire” will reveal in the lush set decoration and those who are into a fun mystery will enjoy the film’s twisty plot points. This was a movie made to be on a B level and in that regard it is a success. A bloody good time indeed. GRADE: B

This article is actually a fastidious one it assists new web visitors, who are
wishing in favor of blogging.