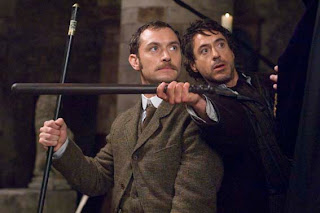 Watching “Sherlock Holmes” made me want to watch Christopher Nolan’s “The Prestige.” Maybe it was similarly elaborate production design or maybe it’s because I haven’t watched it in a while. Maybe I’ll make you want to go back and read Arthur Conan Doyle’s stories the film is based on. Either way you’re likely to get something out of this hip and cool retooling of the Sherlock Holmes stories. This film is filled with the typical masculinity pumped into every Guy Richie film. Heck it even has features a shirtless, bare-knuckle boxing scene. The film is carried mostly by the performance of one Robert Downey Jr., who is still riding high off the success of last year’s double whammy of “Iron Man” and “Tropic Thunder.”

I think one of “Sherlock Holmes’” main strengths is the chemistry between Downey Jr. as Holmes and Jude Law as his trusted friend/assistant/sometimes roommate Watson. Sure the film teases at the homoeroticism found within their friendship (when Holmes needs Watson’s belt in an emergency he says “don’t get too excited” when he quickly removes it) and it does work. Although Watson is with Mary Morstan but he can’t quite bring himself to ask her to marry him. Holmes meanwhile is sort of a loner, although you wouldn’t quite get that from the film’s marketing materials. You’d otherwise assume he’s some sort of 19th century “player.” He’s not. He’s mostly alone and depressed-looking. Even flirtations with the dangerous Irene Adler (the always lovable Racheal McAdams) are brief.

So what is the big mystery that Holmes and his BFF need to solve? Well it seems that the evil Lord Blackwood (Mark Strong) who was hanged for the murder of five women and for practicing black magic isn’t actually dead! He comes back and is killing other people in increasingly supernatural and mysterious ways. Of course there is probably a simple explanation and it’s up to our heroes to figure it out. Blackwood is a pretty good villain and while the film has some moments of humor (I’m not sure I get Downey Jr’s Best Actor Golden Globe being in the musical or comedy category, but he’s obviously good) I’m glad they made villain serious and not some silly caricature. I was genuinely intrigued in what his plan was and how Holmes was attempting to figure things out.

And one can’t help but praise all of the film’s technical merits. The movie was just nominated for an Academy Award for Art Direction and its deserving. The period details seems to be spot on although I wasn’t alive in 1891 so I’m not so sure. But everything looks right. The costumes and sets and camera work are all pretty dazzling. And I really enjoyed Hans Zimmer’s Oscar-nominated score. It’s weird and catchy and perfectly suits the film. I was sort of impressed at how “audience friendly” Richie has made the film as it is about to cross $200 million dollars domestically. He uses a lot of his standard slow-motion action shots (you know like the ones they overused in “300”) but they sort of work and I appreciate all the modern filmmaking techniques to tell a story still set in the 1800s.

Overall “Sherlock Holmes” is a pretty entertaining time to be had. Whether you’ve read the original stories or not you’re bound to enjoy something. Fans of Downey Jr. will certainly be pleased as it’s one of his most appealing performances yet. And it’s good remember why Jude Law became such a famous guy in the first place. So see it if you haven’t, it’s anything but elementary. GRADE: B

Hey There. I found your blog using msn. This is a very well written article.
I'll make sure to bookmark it and ccome back to read more of your
useful info. Thanks for the post. I'll definitely comeback.