Frost/Bitten: “Frozen” is a Disturbing and Intense Ski Lift Thriller 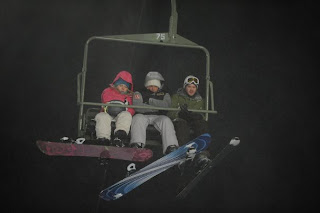 Having never gone skiing, I’ve never been on a ski lift. I can honestly say that the whole idea of a ski lift is sort of scary. I mean some cheap metal bar is the only thing keeping you “in” as your ascent a huge snowy mountain, aka a cold crag of death. So I can’t much imagine what it would be like to be stranded on a ski lift, at night in freezing temperatures during a snow storm with ravenous wolves circling below me. Of course if you were to see “Frozen” an “Open Water” type situational thriller then you would know exactly what it would be like.

I am a big fan of horror films that take place in one setting, usually in real time where the characters are stuck in a situation and must try to figure out how to survive. Something like “The Blair Witch Project” comes to mind which obviously was a big hit in its day and has seemed to be ignored by modern movie-goers as if it’s uncool to like it. Then came last year’s successful and scary “Paranormal Activity” which was “Blair Witch” for the Twitter generation. “Open Water,” which was a film festival hit and a modest mainstream crossover success, dealt with characters trapped in a situation much like those in the new film “Frozen.” Open Water dealt with two SCUBA divers left behind in the middle of the ocean with hungry sharks circling them. It’s gritty video photography and actual use of real sharks upped the fear factor and was simply gut wrenchingly awful (in a good way) to watch. “Frozen” is similar except for it’s more polished look, and whether you buy into its premise or not, your bound to find it disturbing in some capacity.

We’re introduced to Joe (Shawn Ashmore) and his best friend Dan (Kevin Zegers) and Dan’s girlfriend Parker (Emma Bell). Dan and Joe have been good friends since 1st grade and have always gone skiing together. Their friendship has been sort of waning as of late because Dan has been preoccupied with his girlfriend. Now Joe sort of feels like the third wheel and who hasn’t felt that before? So they decide to go skiing together with Emma of course who is a novice. Since they’re poor college students and or not so smart college students they bribe the ski lift operator to let all three of them on the lift since they don’t have money to buy three tickets. They seem to be having a fun day until they have to bribe the guy again to let them on one last time before the resort closes. Do to bad human judgment and a misunderstanding the chair lift is stopped and our three leads are trapped halfway up the mountain.

This is one of those “they’re just stuck in one spot” movies so if you didn’t like “Open Water” they you may not like this. But this film works because writer/director Adam Green makes the situation as realistic as he possible can. They don’t have their cell phones on them for instance. Why? Because who really skis with their cell phone? And since it’s Sunday night the resort won’t be open until the follow Friday, so that makes things significantly worse. So the three begin to think oh hey the chair lift is stuck, we’ll be going soon. And then the lights are turned off. They try having regular conversations about pop culture to lighten the mood, but soon things begin to get stressful. And then reality sets in. What is soon, “I have to go pee” becomes “I have frost bite on my face and my hand is frozen to the metal safety bar.” Oh and what about those hungry wolves circling below?

I’m not going to lie. There are some disturbing images in “Frozen” and there are things that happen that I would have never predicted. Green does a good job at making a movie about 3 people sitting in a chair suspenseful and intense. And I’d be lying if I said I didn’t get a little choked up when two characters must grief along with the stresses of the possibility of freezing to death. Sometimes it’s all hard to watch, and yet you really can’t look away. My eyes were fixed on the screen and whether you think the characters are annoying (I didn’t) you’ll probably gasp or close your eyes at least once. Either that or get a chill down your spine. This is a cool little thriller, in more ways than one. GRADE: B+