Dragon the Line: “How to Train Your Dragon” is High Flying Fun 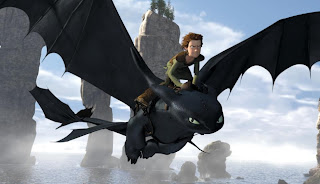 “How to Train Your Dragon” is the latest thrill-a-minute 3D spectacle. It may empty your wallet, but at least it’ll fill your heart. Sure it looks “cool” in 3D and some of the flying sequences are pretty breathtaking, but I’m pretty sure this is still another unnecessary use of 3D technology. Now there was a time just a few years back where I’d go see anything in 3D. it was a novelty then and now it seems to be the standard. And as shocking as this is, I think I prefer my 3D gimmicky. I want stuff being thrown at the audience and I want the characters to be in on the gag. Sometimes not enough things are being thrown at the screen it begs the question “why am I wearing these uncomfortable 3D glasses over my regular eyeglasses. Maybe having so much gear on my face is just annoying. In any case, 3D works for “How to Train Your Dragon” but much like “Alice in Wonderland” I don’t know how much it’s actually needed.

Having said all that, the latest animated adventure from the studio that brought you all those Shrek movies, is certainly a blast. It tells the story of a young Viking and his family who are constantly fending off evil, man-eating dragons. But could it be the dragons are just misunderstood, and like most “man-eating beasts” (ie Great White Sharks?) they are in fact just big creatures that are misinterpreted as monsters? (Although I don’t suggest swimming with Great Whites even if you are Anderson Cooper) Hiccup (voiced by Jay Baruchel) is a skinny little Viking. His father Stoick (Gerard Butler) insists that he go through “dragon hunting training” to make sure he grows up to be a fierce hunter. But Hiccup stumbles upon an injured dragon who can’t fly and after a few meetings realizes the beast isn’t as evil as all the Vikings make the dragons seem.

The animators and writers do probably the best thing possible my making this dragon, who Hiccup calls “Toothless” like a big dog or cat. He’s playful and has many domesticated animal traits that most animal lovers will recognize. And you instantly fall in love with him. I have to admit that the story is very simple, and not completely original (it sort of reminded me of E.T.) and yet it feels genuine and not forced at all. There is humor to be had here but it’s mostly comic relief in the form of various dragons and their quirky personalities as Hiccup’s fellow trainees learn the ropes of dragon hunting. There are characters voiced by Jonah Hill and McLovin himself Christopher Mintz-Plasse and Ugly Betty’s America Ferrera provides the voice of Astrid, whom Hiccup might have some feelings for.

“How to Train Your Dragon” features some really outstanding animation and a terrific look that fits nicely into the other recent outstanding animated adventures. It has some really funny and touching moments and one flying sequence which was pretty breathtaking. Overall I found this an adventure worth taking. Even if I had to wear two pairs of glasses to see it. GRADE: B+