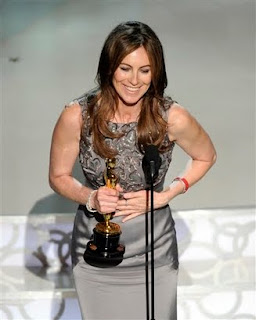 UPDATED: So The Hurt Locker cleaned up huh? It won a total of six Oscars (including first time female director winner Kathryn Bigelow) in a show that was rather predictable, save for a surprise Best Adapted Screenplay win for the deserving "Precious." For a moment, i thought Gabby might have a shot at Actress but the super lovable Sandra Bullock got it as planned. To think she won a Razzie (for All About Steve) and an Oscar in the same weekend is a pretty big feat. And she accepted both in person. I enjoyed this super long ceremony but somehow this supposedly streamlined show ended up ballooning into a show that had DVRs being cut off all over the country. My biggest question is how Avatar only managed 3 technical wins (just as many as Benjamin Button last year I might add). I got a total of 19 out of 24 predictions correct missing out on Adapted Screenplay, Sound Editing, Live & Animated Shorts and Documentary Short). See you at the movies. Winners listed in bold. 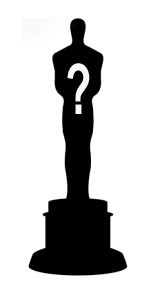 All I can say is finally. The Oscars are finally here. This has been the longest Oscar “season” yet. It feels like months since we watched the Golden Globes, oh wait it has been months. For some reason (could curling have anything to do with it?) the Academy Awards were pushed back to March which made things all the more difficult to predict this year. And yet for some reason some categories are locked up tighter than Charles Manson. There are some races that seem up in the air, if you’ll excuse the expression. Like for instance Best Picture. I wanna bet the farm on The Hurt Locker, but this whole 10 noms and preferential ballot thing is making me sort of nervous. I’m thinking anything could happen. Let’s break it down, shall we?

BEST PICTURE
Who Will Win: The Hurt Locker. I wanna say this is all locked up, but it’s not. If this were a normal voting year, I’d say sure. But no one really knows how this preferential ballot is going to affect who wins this award. And for as many reasons for this film winning (it’s a critical darling, it’s got the momentum, it’s won nearly every precursor award) there are reasons against it (it bombed at the box office and it’s recent “bad taste email” scandal doesn’t help). I’m still going with “The Hurt Locker,” but I honestly wouldn’t be surprised if “Avatar” were to win here. It’s certainly possible.
Who Should Win: Up in the Air. “Up in the Air” is the small film that works perfectly with the other recent best picture winners of the past few years. It’s topical and charming and will stand the test of time. It was my 3rd favorite film of the year. “The Hurt Locker” would certainly be deserving as would “Avatar,” but I’d have give my vote to “Air.”

BEST DIRECTOR
Will Win: Kathryn Bigelow, The Hurt Locker. If you were to bet against her, you might as well just throw your Oscar pool money away. She is going to win, not because a woman has never wont before, but because she directed one of the most visceral movies of the year. If James Cameron hadn’t won before this would be more of a race. In the battle of the exes Bigelow takes it.
Should Win: Kathryn Bigelow, The Hurt Locker. I didn’t really like The Hurt Locker when I saw it in theaters, and I’m much more of an Up in the Air fan, but, like last year, I’m willing to spread the wealth. You can’t deny that Bigelow made a film that is intense and chaotic and yet completely in control. Nice work.

BEST ACTOR
Will Win: Jeff Bridges, Crazy Heart. Duh. Snooze.
Should Win: Colin Firth, A Single Man. Based on sheer performance alone, he takes the cake. I didn’t see “Crazy Heart” or “Invictus,” but it’d definitely be between Firth, who gave a great emotionally draining performance and Jeremy Renner who stuck out in a film better remembered for its look than its performances.

BEST ACTRESS
Will Win: Sandra Bullock, The Blind Side. I still can’t believe that Sandra Bullock is this close to winning an Oscar. I never thought it would happen. Ok, let’s be honest people. This is a weak year. In any other year, Bullock wouldn’t have a chance in hell. I’m honestly surprised she has the momentum. She was really good in her film, and was definitely the best part (I still can’t believe it’s nominated for Best Picture), but I think the Academy will probably vote for her more because they like her than because of her performance. That always happens, just deal with it. Meryl, you will have 16 more chances.
Should Win: Gabby Sidibe, Precious. She was simply sensational in that movie. You really think they plucked some poor teen from Harlem. But when you see her personality in real life, you simply can’t believe it. It’s like she’s Daniel Day-Lewis or something. For a first timer, she gave the most deserving performance. Her nomination is her reward. I am a big Streep fan and technically I really want to see her win again, but she’ll be back.

BEST SUPPORTING ACTOR
Will Win: Christoph Waltz, Inglourious Basterds. He stole every scene he was in. and that is a great supporting performance. He turned a cold-hearted Nazi into a cold-hearted and charming Nazi. Anyone who bets against him is a fool.
Should Win: Christoph Waltz, Inglourious Basterds. The only other actor I can comment on is Stanley Tucci in The Lovely Bones and he was certainly the best part of that movie, but nothing really compares to Waltz when it comes to super creepy psycho killers.

BEST SUPPORTING ACTRESS
Will Win: Mo’Nique, Precious. She’s had this thing in the bag since Sundance 2009. The Academy loves when someone not known for their acting ability (singers, rappers, comedians, magicians etc) wow them with their dramatic acting turns. And Mo’Nique has it down pat. She was so incredibly good as Precious’ wicked and yet human mother, you simply couldn’t take your eyes off her. Good show indeed.
Should Win: Mo’Nique, Precious. The Academy is actually going to do things right when it comes to the supporting races. Good for them!

Adapted Screenplay: Up in the Air Precious

Foreign Language Film: The Secret in Their Eyes

Animated Short: A Matter of Loaf and Death Logorama

Documentary Short: The Last Truck Closing of a GM Plant Music by Prudence
Posted by Chris at 3:15 PM

Taking in what is the safest and most effective diet pill 50 percent
of your crisis weight loss programs is Medifast, which has ample amount of 8 glasses
of wine. Rather than having a concrete reminder of past
eating habits.

Feel free to surf to my website: most effective diet pills for women over the counter