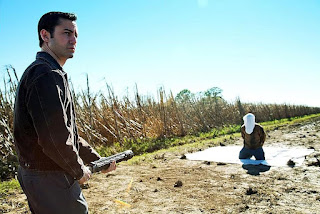 “Looper” is one of the best sci-fi films of the past few years and easily stands as not only one the best films of the year, but yet another outstanding career move for Joseph Gordon-Levitt who constantly appears the top films of their respective years. It’s part action thriller, part neo-film noir, and part crime saga all wrapped up neatly in a fascinating time travel tale. The film takes place far in the future. Time travel has been invented but has quickly been made illegal. However, mob guys have harnessed its power: whenever they wanna “dispose of” somebody, they send him back in time and have a hit man known a “looper” kill him in the past where their identity doesn’t quite exist yet. Once these loopers are done with their hit man ways, they’re forced to kill their future self to rid their mob boss’ connection with these loopers. It all sort of sounds confusing and rather convoluted, but for a time travel sci-fi tale it all makes surprising sense. Oh, and it’s extremely rewarding and entertaining on top of it.

“Looper” can easily stand with such modern sci-fi classics as Minority Report and Inception and even the likes of Blade Runner and The Terminator. What makes the film so successful are strong performances from its cast, a solid well-written script, and a simply fascinating futuristic and original world conceived by writer/director Rian Johnson (“Brick”). Joseph Gordon-Levitt gives an uncannily good performance as Joe. Joe is a twenty-something guy who makes his living as a looper in the year 2044. People are sent to him from the year 2074 for him to kill and dispose of. And he gets paid handsomely in silver. He also spends a lot of time getting high from some type of eye-drop drug. You’ll notice that Gordon-Levitt doesn’t quite look like himself – that’s because an older version of himself is played by Bruce Willis. Willis, as the older Joe, is sent back in time to be killed by his younger self – a process known as “closing the loop” – but complications arise when Willis decides he doesn’t want to die, overtakes his younger self, and escapes determined to stop his younger self from killing him.

It’s such a wild and original idea and yet the story never gets bogged down in boring exposition or disappointing plot holes. For a movie that uses time travel, everything seems rather airtight. Gordon-Levitt and Willis are strangely good and even Emily Blunt, as one of this society’s 10% who have telekinesis powers, who’s introduced in the film’s second half gives a rather splendid performance as well. Johnston is constantly aware of what he’s doing from every frame and manages to keep the audience guessing until the very end. And for a lower budgeted film, the effects are rather impressive. The entire production seems effortlessly well-produced and well-conceived. There’s no gimmicky futuristic stuff that doesn’t seem relatively possible.

“Looper” is easily the instant sci-fi classic it strives to be. It creates a remarkably well-conceived world, a story with a tight script, and great performances. And best of all, it never gets bogged down with confusing story elements or having to deal with the ultimately implausible paradoxes of time travel but flows nicely and features some great character development, without ever once being the slightest bit boring. Sci-fi nerds take note, this one’s a keeper.  GRADE: A
Posted by Chris at 11:18 PM

My partner and I stumbled over here from a different websiite and thought I might as well check things out.
I like what I see soo now i am following you.

Look forward to checking out your web page
yet again.

Here is my webb blog: how to get free membership on club penguin

The best space for your child to relax!: wingsio
slither io

The best space for your child to relax!: wingsio | slither io | ya

Such a very useful article. Very interesting to read this article.I would like to thank you for the efforts you had made for writing this awesome article.

I liked it so much and very interesting, too! Thanks for sharing the experience.
Wonderful post, really great tips and advice.
friv 3 games
friv4school 2017
kizi 2
zoxy games

Thanks for sharing the information. It is very useful for my future.juegos kizi | juegos yepi | games friv

Very interesting! Thanks you

Not all are true. Everyone has their own way of thinking but I think they have to reconsider. I like to argue for the most accurate results.
http://colorswitchplay.com

Thanks for the information you shared. Please share useful information with your friends regularly
http://papasgamesonline.com

I was very impressed by this post, this site has always been pleasant news. Thank you very much for such an interesting post. Keep working, great job! In my free time, I like play game: facebooklite.com.br. What about you?

I understand what you bring it very meaningful and useful, thanks.
www.appbaixar.com

Many thanks for sharing pocaauto with us

Thank you, so Much admin have a nice day :) you information about weight loss is very easy and simple.
online instagram

Thank you very much for the information you shared, it’s all I’ve been looking for
www.happywheels-2.com

I am looking for my memories through the stories, the narrative of people. I feel it is difficult but I will try.
povaup

Thank you for such a sweet tutorial - all this time later, I've found it and love the end result. I appreciate the time you spent sharing your skills.
instagram viewer images

I appreciate you and hopping for some more informative posts. thanks for share
run3.run

Alot of blogs I see these days don't really provide anything that I'm interested in, but I'm most definately interested in this one. Just thought that I would post and let you know. Nice! thank you so much! Thank you for sharing.
http://b612az.com

I have read your article, the information you give is very interesting.
pocatravel

Your article is very interesting. I think this article has a lot of information needed, looking forward to your new posts. Get permission to share:
returnman3game.com

Thanks for sharing such a nice article. It is really useful to me and all people. One think in my mind came while reading that it is not wasting of time. kizi-games.net the aim of the game is to get the block to fall into the square hole at the end of each stage. There are 33 stages to complete. friv games is a great place to play the best free online

I loved this post! Someone said your blogs fairly often and you’re always coming out with great stuff. I shared this on my facebook and my follwers loved it!Send Gifts To pakistan


This information is very useful. thank you for sharing. and I will also share information about health through the website

I thank you for the information and articles you provided

Technology News is a guide and recommendation blog on the most popular switches , sound card , wifi adapters , best convertible Laptops technology this year.