Top Dog: The Deliciously Strange “Frankenweenie” is Tim Burton at His Best 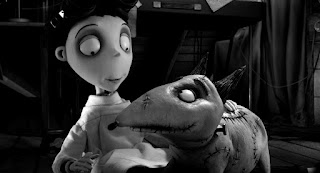 Even if Tim Burton has become known for helming large studio films over the years he still knows how to pilot a smaller scale quirky movie with delightfully macabre sensibilities. “Frankenweenie” is certainly no exception and is probably one of his best films since “Sweeney Todd” or day I even say “Sleepy Hollow.” Burton has taken a simple premise about a boy who brings his beloved dog back to life and woven it into a wonderfully strange and compelling story about science gone amok in a small town. There are homages everywhere from the obvious ones like “Frankenstein” and “Bride of Frankenstein” to everything from “Godzilla” to “The Birds” and even “Gremlins.” In fact, “Frankenweenie” is probably the best “Best of Burton” film to come out in some time. It features all his trademarks that have given him such popularity and success over the years, from his weird depiction of suburbia – obsession with death and decaying things – social outcasts – and even his patented black and white stripes that can be found throughout most of his films.

“Frankenweenie” started as a live action short before Burton even had a film career back in 1984. The executives at Disney weren’t thrilled with it, but it essentially launched his directing career. And here we are nearly thirty years later, with a new full length stop-motion animated version and it’s everything a Tim Burton fan could want in a movie. It’s an obvious homage – and spoof – of Mary Shelley’s Frankenstein story. Young Vincent Frankenstein (voiced by Charlie Tahan) is a lonely boy whose dog Sparky is his only friend. He’s something of a young genius because after his beloved pet is hit by a car, he devises a way (inspired by his new science teacher Mr. Rzykruski voiced by Martin Landau) to reanimate Sparky by harvesting lightning. The pet is brought back to life, but he keeps it from his parents (Catherine O’Hara and Martin Short in multiple voice roles). But soon some of Victor’s other classmates find out about his new “experiment” and hope to copy his idea in order to win the science fair. This brings about a wickedly enjoyable, and surprising, third act which I refuse to spoil.

Tim Burton is in top form here. His long time collaborating screenwriter John August (Big Fish, Corpse Bride) has turned a 29 minute short into an 87 minute monster mania extravaganza. It’s a wonderful throwback that features stunning black and white animation, a beautiful if not particularly memorable score from the ingenious Danny Elfman, and an equal sense of fun and heart. You’ll be amazed at how much you care about Vincent and his best friend Sparky. And enough can’t be said about “Weird Girl” and her sidekick Mr. Whiskers. She’s truly an original and fascinatingly hilarious creation.

Enough praise can’t be heaped upon “Frankenweenie” in my humble opinion, Burton fans will rejoice. It feels the most like “old school Tim Burton.” Those that have had issues with his last few films, this will certainly pull you back in and forget that “Alice in Wonderland” ever even happened. It’s a film that can certainly stand up to the best of Tim Burton and is one of the best stop-motion movies since Burton’s own “Nightmare Before Christmas.”  GRADE: A
Posted by Chris at 9:57 PM

I was very impressed by this post, this site has always been pleasant news. Thank you very much for such an interesting post. Keep working, great job! In my free time, I like play game: imgtaram. What about you?

Thank you for your post, I look for such article along time, today i find it finally. this post give me lots of advise it is very useful for me

I like your all post. You have done really good work. Thank you for the information you provide, it helped me a lot. I hope to have many more entries or so from you.
Very interesting blog.
www.baixarfacebookgratis.com.br

thank you, I read and always read the article on this website

thank you for the information provided, we are waiting for the next info

Thank you for sharing this. It was helpful. Keep sharing such things.
Also I like to play Nulls Royale which is more fun than any other game.

I love such movies keep sharing more such stuff. Thank you so much!