The Phantom Menace: Even with Its Fourth Entry “Paranormal Activity 4” Manages Some Decent Scares 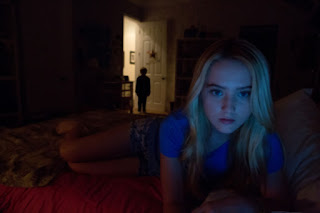 Nowadays, one really has to appreciate the “Paranormal Activity” films. Critics and audiences complained (myself included) ad nauseam about the banality that the “Saw” franchise became year after year. With those films all they did was flash blood and guts at the audience and nothing more. With this spooky “found footage” franchise, the “Activity” films are produced on a minimal budget with some truly interesting effects and frights. At number four by sheer definition the film isn’t nearly as frightening as the first incarnation. But even if the premise is overstaying its welcome, these films could actually be a lot worse. I love that filmmakers can take a miniscule budget, this time about $5 million (the first cost only $15,000) and do almost anything with it. It’s a franchise that requires innovation and ingenuity and just enough differences from year to year to prevent the whole thing from getting too stale. And audiences come in droves – because they want to be scared and not grossed out. You kind of have to respect that.

We’re introduced to a new family in Nevada. It’s been five years since the events of Part 2 (Part 3 was a prequel set in the 80s if you recall) and the possessed Katie (Katie Featherston) and her little nephew Hunter have never been located. I can imagine that they’re the new neighbors that now live across the street from teenager Alex (Kathryn Newton) and her family – her dad, stepmom, and younger brother Wyatt (Aiden Lovekamp). Some kind of incident across the street leaves new little neighbor Robbie (Brady Allen) without parental supervision, so he stays with Alex’s family until his mom recuperates. Robbie would even make Damien from “The Omen” a little freaked out.

Alex finds little Robbie slightly bizarre; the way he behaves for a young child is rather strange. He introduces himself by extending his arm for a handshake to little Wyatt – something no seven year old really would do. Upon Robbie’s arrival strange things begin to occur so Alex and her boyfriend Ben (Ben Shively) set up webcams around the house – including the Xbox 360’s Kinect which displays millions of glowing green dots when viewed through a night vision camera producing a rather eerie effect (put to good use I might add). Remember this series is a “found footage” horror film so there are plenty shots of people sleeping or going about their boring business and having conversations we don’t really care about or believe anyone in their right mind would actually film but that’s beside the point.

Directors Henry Joost and Ariel Schulman (who also did part 3) waste no time getting the chills on. Some complained, particularly in part 2 that the paranormal activity took too long to get going. Here some freaky stuff happens almost too soon. I honestly thought the climax was approaching with all the intense goings on that I was surprised to find there was an entire third act to go. Alex is a rather resourceful young woman – and the actress gives a decent lead performance. All the actors really need to do in these films is make you believe that they’re ordinary people in an extraordinary situation – and I bought it. Although with all the ridiculous things happening – like chandeliers falling, and weird ghostly images caught onscreen, and knives vanishing and reappearing out of thin air - there’s no way these people wouldn’t leave that house in a heartbeat.

“Paranormal Activity 4” unfortunately doesn’t quite add much to the mythology that was delved so deeply in the third film, but it still manages to create a decent sense of dread and a few intense and creepy moments – particularly a harrowing escape from an exhaust filled garage and a nice little nod to “The Shining.” This is a movie that offers what most people expect from these movies and nothing more really. And it leaves some lingering questions that will most likely be answered in yet another sequel – which may be the least surprising shock of all.  GRADE: B-
Posted by Chris at 11:53 PM

Your blog posts are more interesting and impressive. I think there are many people like and visit it regularly, including me.I actually appreciate your own position and I will be sure to come back here.
potty-racers2.com

I have been casting spells for many years and I have helped many people, I might be able to help you too. I am honest, and I genuinely care for all the clients who choose me to cast a spell for them.
If you have any questions about Love, Money, curse, protection, bad luck, divorce, court cases, or about me please call or email me. I really want you to feel comfortable before moving forward with any spells, or other services. I will take the time to explain things to you and provide you with honest advice, to what is best for your situation. I will not pressure you into having a spell cast, I will leave that decision up to you, and when or if you decide to move forward, I might be able to help you.
I will respect your Privacy. I will not seek to obtain any of your personal information beyond what you might voluntarily offer and all information you might give me including emails, phone numbers and photos will remain private and confidential.
I perform my Rituals only at night between the hours of 0.00 - 0.59 (South African time) lasting 1 hour but of course, this depends on the nature of the ritual, some rituals might take hours and can also become necessary to be performed at specials places like; flowing streams, cemeteries and other places dictated by the gods.
I do not want anyone to be under any illusions about my spells and its numerous rituals. Real and effective Voodoo is no child's play, it is expensive because, after the rituals, I will have to destroy all the materials involved by fire and the ashes scattered over a flowing stream or river.
You will get what you seek.But please understand this might take a lot of time and that individual results may vary. contact +27663492930, greatogudugu@gmail.com

Herbal cure for Following DISEASES,this is not scam is 100% Real.

i couldn't believe that i would ever be re-unite with my ex-lover, i was so traumatize staying all alone with no body to stay by me and to be with me, but i was so lucky one certain day to meet this powerful spell caster,after telling him about my situation he did everything humanly possible to see that my lover come back to me,indeed after casting the spell my ex-lover came back to me less than 48 hours,my ex-lover came back begging me that he will never leave me again,3 months later we got engaged and married,if you are having this same situation just contact powerful spell caster on his email: chiefdrlucky@gmail.com or Whats App him through +2348132777335
Website: http://chiefdrluckysolutionhome.website2.me/. thanks very much sir for restoring my ex-lover back to me