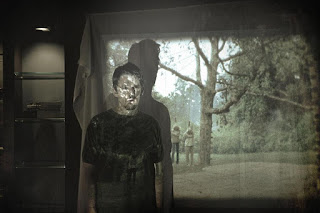 When you watch as many horror films as I do it becomes more and more difficult to scare me. But then movies like “Sinister” come along and wham I’m a cowering little boy scared out of his mind. There have been some films over the past few years capable of truly frightening me. Those would include “Paranormal Activity” and “Insidious.” And now here is “Sinister” which takes a cue from these movies with an interesting addition of “The Ring” as well. It actually works as a mix of serial killer thriller, supernatural horror, and found footage creepfest. It’s certainly the scariest movie of the year, and while it doesn’t rely on blood and guts (there’s actually relatively little actual onscreen violence) it makes up for in sheer disturbing images that are certainly not for the little ones.

The film stars Ethan Hawke (in an amazingly effective performance) as a true crime novelist. His name is Ellison and he has just moved his family (his wife, young son and daughter) to a new suburban house so he can conduct research for his new book: about a family that was mysteriously hanged to death– in the backyard of the house he just purchased. Ellison finds a box of super 8 film reels in the attic, and each one is more terrifying than the last. They all contain footage of different families being brutally murdered, in varying but equally disturbing ways. In each case, a child in the family was also missing. Ellison is determined to solve these crimes and become famous and rich and provide for his family. But at what cost? Soon things go bump in the night and he slowly unravels a mystery that may not quite have been worth unraveling in the first place.

There are some truly terrifying moments in “Sinister.” Even the strongest of constitutions will find some scenes disturbing. Scott Derrickson who tried his hand at horror in the underwhelming “The Exorcism of Emily Rose” has certainly delivered with this film (which he co-wrote with C. Robert Cargill). The family’s house is appropriately underlit, even in the daytime, and the nighttime sequences are overwhelmingly suspenseful. Even if the film uses a few too many “children are creepy” moments for my particular taste, the movie offers some truly frightening images. The “found” super 8 footage consists of some nightmare-inducing sequences including one in which a family is tied to their beds and an off-screen killer slits each of their throats. It’s enough to give Hannibal Lecter the willies.

The film takes its time, setting up the story and characters without just throwing scary things in our faces for no reason. Its emphasis on atmosphere and suspense rather than blood and guts is a nice change of pace now that the “Saw” films are no longer in existence. Hawke gives a great central performance and its enthralling to watch his character mentally unravel as he discovers what sinister secrets are lurking in his house. His obsession with wanting to write a successful novel and his love for his family ring alarmingly true. This is a frightening, original horror entry that should become a staple in everyone’s Halloween scary movie viewing schedule.  GRADE: A-
Posted by Chris at 10:27 PM

Many thanks for sharing it to us friv4schoolonline.net

I was very impressed by this post, this site has always been pleasant news. Thank you very much for such an interesting post. Keep working, great job! In my free time, I like play game: mutilateadoll2game.com. What about you?

Your topic is very great and useful for us…thank you

I like your all post. You have done really good work. Thank you for the information you provide, it helped me a lot. I hope to have many more entries or so from you.
Very interesting blog.
minecraft2.com.br

I thank you for the information and articles you provided