The Great Escape: The Thrilling “Argo” is a Taut Ode to 70s American Cinema 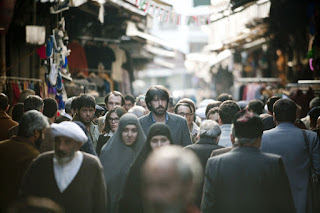 Argo tells a story so preposterous it has to be true. And it is. It’s a real movie about the making of a fake movie. But this fake movie, a science fantasy adventure called ‘Argo,’ is a cover to help rescue six American embassy employees in hiding during the Iranian hostage crisis in 1979. Director Ben Affleck (who is 3 for 3 by the way) begins his hostage thriller with a riveting prologue in which hundreds of angry Iranians storm the US Embassy in a glorious mishmash of film stocks much of which looks like actual footage (I don’t think it is, but I could be wrong). Most of the embassy workers are taken hostage while six are able to slip away in the chaos. And then this sets up the film’ story: how does the CIA help those Americans escape a country who wants them dead?

“Argo” works so well as these films tend to do in a post-9/11 world, much like “Munich” before it, filmmakers have been making movies about terrorism and foreign hostility for years since that tragedy. But this isn’t a meditative expose about the state of terrorism, it’s really a crackerjack Hollywood thriller complete with edgy humor and heart pounding suspense. It also just so happens to be true. It all feels like a strange mashup of “Ocean’s Eleven” and “Munich” with a dash of “Dog Day Afternoon” and “Midnight Express” thrown in. Set in 1979 and early 1980, the film feels like it could have fit right into the Hollywood New Wave of dynamic, gritty American filmmaking.

CIA agent Tony Mendez (Affleck) poo poos the other agents’ ideas on how to get those Americans in hiding out of the country. While watching a Planet of the Apes movie on TV he comes with an idea so ridiculous it just might work: he will have the six Americans pose as a Canadian film crew out location scouting. He recruits Oscar winning makeup artist John Chambers played by John Goodman and producer Lester Siegel played by Alan Arkin. They find a garbage script called “Argo” which would require foreign locations… Iran perhaps? But these people don’t just have to slip into the role of screenwriter, producer, director etc, they have to memorize full backstories and facts that the Iranians would ask if they were to be questioned. One small slip could mean a shot to the head.

Screenwriter Chris Terrio and Affleck's stranger-than-fiction “Argo” is ingenious in that they force us to accept this plan that sounds impossible from the beginning. Why would anyone travel to Iran during such a hostile time in the first place? But to witness this whole thing play out is something wondrous to behold. The film’s ending scenes are some of the most suspenseful sequences I’ve seen in a film in quite some time. There are truly outstanding performances from the entire ensemble from Bryan Cranston as Mendez’ supervisor and Victor Garber as the Canadian ambassador who helps provide shelter for the six Americans. It’s an unbelievable story that truly has to be seen to be believed and worth every award it could potentially receive. Let’s just hope Oscar voters agree.  GRADE: A
Posted by Chris at 9:46 PM

Alot of blogs I see these days don't really provide anything that I'm interested in, but I'm most definately interested in this one. Just thought that I would post and let you know. Nice! thank you so much! Thank you for sharing.
www.baixar-whatsapp-gratis.com.br