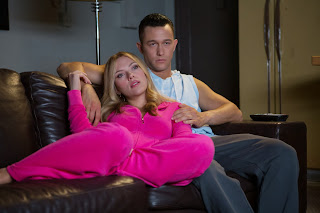 Everyone seems to know Joseph Gordon-Levitt these days. He was a child actor in Angels in the Outfield. He was a teenage alien on TV in “3rd Rock from the Sun” and he’s been in a string of successful films from the indie hits “(500) Days of Summer” and “Looper” to big summer spectacles like “Inception” and “The Dark Knight Rises.” But he has finally turned things around, quite literally, but getting behind the camera for his directorial debut “Don Jon.” And it’s about a guy who’s addicted to internet pornography. A hit at this year’s Sundance Film Festival, “Don Jon” boasts fine performances from its dedicated cast and a witty script by Gordon-Levitt as well.


Gordon-Levitt plays Jon. He’s a typical New Jersey “guido” type we’ve come to see in various media outlets (i.e. “Jersey Shore”). He has a routine. He likes his apartment to be neat and tidy, he loves his close-nit traditional family, his best guy friends, loves working out, and loves the ladies. Oh and he loves porn. He loves the fantasy it provides more than actual women. It only seems to become a problem when he meets Barbara (Scarlett Johansson) at a night club. He doesn’t sleep with her right away like he would with most women. She seems special; she also plays hard to get.  Eventually they start an actual relationship. That means that after having sex, he must sneak away to the fantasy world of his computer anyways. Things get really crazy when she catches him watching one of his naughty videos. She’s disgusted. And she has every right to be.


We’ve come to accept in society that pornography is degrading, filthy, and for perverts. But I think it’s more complicated than that and so does Gordon-Levitt. Yes pornography exists solely for men who objectify women. But that happens in daily life as well. All the movies, TV shows, and advertisements use women’s bodies for men to oogle. Gordon-Levitt even comments on male and female roles when Barbara gets annoyed at Jon because he likes to clean his own apartment. Apparently that’s a woman’s job.


Gordon-Levitt, who begins his film in a purposefully formulaic way makes things interesting when he introduces Esther, a middle-aged woman who Jon meets during his night school class. The film sets up Jon as a man’s man, and Barbara as a woman’s woman and you expect a typical romantic comedy set up. But as Barbara and Jon’s relationship begins to crumble because of his addiction, Esther becomes more important to the film’s story than we’re prepared to thing. Of course she must be important however since she’s played (wonderfully) by Julianne Moore. It’s sort of strange story development, but one what that is unexpected even if it feels not completely natural.


Gordon-Levitt knows the clichés and trappings that come to romantic comedy territory. Is “Don Jon” actually a romantic comedy? I believe it is. It is funny, but at times it feels real. The characters seem all too realistic at times and therefore it gives it the dramatic weight missing from similar films like this. It’s certainly not for everyone – it’s frank depictions of sexuality is something not regularly seen by wide audiences but it has such a fun time picking apart what you’ve come to expect from a movie like this (even with hilariously game cameos from Anne Hathaway and Channing Tatum) that you can’t help fall for “Don Jon.” It might make you feel a little icky inside, but it’s an assured and bold film from a new talent I’m excited to watch develop artistically.  GRADE: B+
Posted by Chris at 6:59 PM