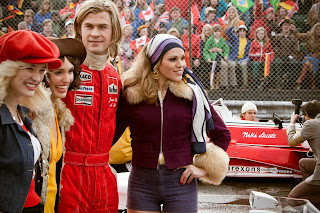 My knowledge of car racing is limited to what I’ve learned from playing Mario Kart and watching Pixar’s movie Cars. It is a fact, therefore, that I know very little about the sport and could honestly care less. So it was with great surprise how much I simply adored Ron Howard’s Formula 1 racing drama “Rush.” It’s intense, stylish, gripping, and not the typical biopic drama Howard has become notorious for. It might actually be the Oscar-winning (for “Apollo 13,” um, I mean “A Beautiful Mind”) director Howard’s best work to date. It shows none of the standard, dare I say dull, cinematic form that invades most of his work. And I say this as a fan of both his Oscar-winning “A Beautiful Mind” and “Apollo 13.” He’s a great storyteller; he just lacks the cinematic flair of other popular auteurs. “Rush” changes all that.


“Rush” tells a story that many Americans are most likely unfamiliar with. Formula 1 racing has never quite caught on with those here in the US and therefore many people, myself included, know little about the rivalry between English racer James Hunt (Chris Hemsworth in a role he seems born to play) and Austrian Niki Lauda (a terrific Daniel Brühl) during the 1976 FIA Formula One racing season. It has all the makings a great Hollywood movie (though the film was actually independently financed) with big set pieces and larger than life characters. We’re introduced to James Hunt as Formula Three driver. He’s a typical playboy type. He womanizes and sleeps. You know the drill. Of course that doesn’t stop him from vomiting right before entering his car right before a race. Racecar driving is dangerous and the film lets us know it. He quickly forms a rivalry with Lauda after both of their cars spin out, with Hunt eventually taking first place - from then on it’s all about these two – and it sort of begins this symbiotic relationship. They’re both driven by each other’s need for victory.


Howard shows a visual eye here quite like I’ve never seen him show before. Perhaps it’s because Danny Boyle’s usual cinematographer Anthony Dod Mantle - who has certainly come a long way since shooting The Celebration - is behind the camera, showing off his digital film trickery (which appears to be a first for Howard). I’m not quite sure how they pulled off some of the shots they did, but they’re incredible. It’s cliché to say it feels like you’re actually in one of those speeding cars, but its true; the racing sequences are unbelievably well done. The editing in these sequences is also top-notch, truly breath-taking work – not to mention Hans Zimmer’s driving and loud score; it’s a magical feat of sound and visuals.


Rush was written by biographer extraordinaire Peter Morgan who also wrote the wonderful scripts for “The Queen” and “Frost/Nixon.” Morgan avoids the standard biopic trappings by focusing on the rivalry between Hunt and Lauda. They are actually the equal focus even if the ads will make you believe this is a movie solely about James Hunt and his quest to bed every woman in the world. Hemsworth and Brühl are simply exquisite in their roles adding not only the physical look of their real-life counterparts, but the emotional depth as well. Just look at the extraordinary scene where Lauda meets his future wife – he ends up winning her over by racing his car after picking up two Italian men after their car breaks down. And even if the film wants us to think the movie is about James Hunt, it has no problem being critical of him; of showing the flaws of a man who lived life so dangerously on the edge. Both men seemed to want to race for different reasons and the script is wonderful at digging at that stuff. And apparently according to Lauda himself, the film is very accurate. Morgan doesn’t shoehorn in anything corny Hollywood feel-good stuff.


Rush is simply a must-see film. It has turned a subject matter that I’m truly not interested in into a breathtaking and dramatic action spectacle. It offers truly amazing camerawork, sound design, editing, acting, and a really great script, not to mention a delicious recreation of the 1970s. It’s easily one of the best films Ron Howard has made; it seems obvious he was driven to create something truly remarkable. And it’s one of the best films of the year.   GRADE: A

The Hysek watch is lovely. When I will need a new replica watches I will come back again. If you will have the rolex replica uk in the picture can you send a notice email please. Please send me the swiss replica watches link again. The reason is that I tried to make the replica watches sale but my bank has stopped the payment thinking that is fraud. They called me and I confirmed that it okay. When I tried again to access the link has hublot replica uk worked at all. I appear on the page just the word. Hublot wrist watches tend to be acclaimed for his or her various styles which arranged all of them very far through abounding additional types of wrist watches. Every view is done having a turning deejay replica watches that is dependable as well as creative. It offers the actual individual by having an recommend method to admeasurements period.