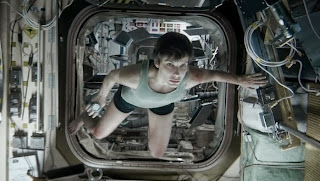 There aren’t enough adjectives in the galaxy to describe how wonderful “Gravity” is. It’s not just a hugely well-made, entertaining thriller; it’s a game-changer. A film that can, and most likely, will change the face of cinema until something else comes along and tops it. It will make you question how on earth the filmmaker captured the images you’re seeing. It must have been an extremely challenging effort for a movie that's pretty simple in nature: two astronauts become stranded in space after some space debris damages the space shuttle they’re working on. It’s essentially a survival story told in the most epic of ways. Except that it's like nothing you've ever seen before. And you'll convince yourself they actually shot in space.


Sandra Bullock plays Dr. Ryan Stone who is on her first space mission. Her colleague Matt Kowalski (George Clooney) is a veteran astronaut on his final space mission.  They’re both on a spacewalk attempting to repair some equipment when Mission Control informs them of a debris field from a Russian satellite mission test is headed towards them. And if we learned anything from the movie “Twister” it’s that debris is a bad thing. The debris takes damages their entire space shuttle and even kills off Stone and Kowalski’s fellow crew members, essentially stranding them with nothing but their space suits between them and the cold emptiness of outer space. It’s a terrifying prospect and even more horrifying to witness on a big screen in 3D. In a word, it’s astonishing.


It’s amazing because of director Alfonso Cuarón’s expert cinematic eye and a willingness to push the medium and show us something we simply have never seen before. For instance, ever a lover of long takes, Cuarón begins his film with a single unbroken take that lasts for about twenty minutes or so. The cinematography is a godsend. DP Emmanuel Lubezki will most likely be winning his first Oscar because it’s impossible to figure out how he got the shots he did. He pans into Stone’s face, goes through her glass helmet, and it becomes a point-of-view shot until the camera turns back out and becomes a third person shot again. There is some seriously awesome digital tricky at work here and it’s mind-blowing. Lubezki deserves an Oscar just for the one shot of Bullock huddled in a fetal position as she floats in the anti-gravity hatch complete with umbilical cord-like tubes swirling around her. My eyes will never once forget that image.


The sound design is simply exquisite. Because sound can’t exist in outer space, all the explosions caused by the debris are basically silent. The combination of violent explosions with little sound (though backed up with a pulse-pounding score by Steven Price) has such a disorienting effect that it makes what you’re seeing that more realistic.


Cuarón co-wrote the film with his son Jonás and even though the film’s story is simple, both lead characters are fully formed. We learn about Stone’s past including her dealing with the death of her young daughter. Both leads are sensational, but Bullock is the real star here. It’s perfect casting really because there’s no actress on earth more likable thank Sandra Bullock and we’re with her for every minute of her horrible ordeal. We root for her, we are with her and she’s sensational.


Reading a review of “Gravity” is essentially pointless. There’s no writer on the planet capable of describing the experience of this film. It's kind of like Open Water or Cast Away or 127 Hours or 2001 yet it's nothing like those films. It’s something that has to be seen to be believed. It is suspenseful, terrifying, emotional, gripping, beautiful, transcendent. The effects (and 3D) aren't just amazing; they're a technical achievement of epic proportions. It goes by in a clip but will stay with you long after it’s over. "Gravity" will make you change the way you look at movies. Essentially an audacious experiential film, it’s probably the most amazing large-scale big budget spectacle I’ve ever had the pleasure to witness on the big screen. Like gravity itself, it pulls you in and doesn’t let go. See it.  GRADE: A