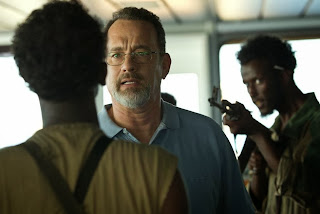 In “Gravity” you really thought that Sandra Bullock was an astronaut lost in space. In “Captain Phillips” you really think that Tom Hanks has been taken hostage by Somali pirates. Both films are extremely realistic and cause a visceral reaction from their audiences. “Captain Phillips” is a gritty thriller set on the high seas and tells the true story of Captain Richard Phillips who’s ship cargo ship Maersk Alabama was hijacked by Somali pirates back in 2009. Director Paul Greengrass (of “Bourne Supremacy” and “Ultimatum” fame) takes the approach he took with the criminally under seen 9/11 hijack drama “United 93” by employing shaky documentary-like footage to really capture the terror-filled situation in an almost unbearably realistic way. It gives the film an immediacy that puts you on that ship.


It’s crazy to think that everyman Tom Hanks hasn’t really had a big hit film in a long time. He’s been in stuff here and there, but his last mega hit was the critically underwhelming “The Da Vinci Code.” In “Captain Phillips” he gives his best performance since “Cast Away.” Both films are about a man’s attempts at survival, albeit in very different situations. Hanks is Captain Richard Phillips. He’s a normal guy from Vermont.  His wife (played by Catherine Keener) drops him off at the airport and he flies to his job on the other side of the world, steering the cargo ship Maersk Alabama through pirate infested waters.  His crew is aware of the piracy situation; in fact, they perform drills in case such a situation was to come up. It does.


Director Paul Greengrass does something so perfect with “Captain Phillips.” He doesn’t treat the pirates as just one-dimensional monsters. They are bad guys, of course, but they’re not portrayed as mindless  evil doers. Four pirates successfully board the ship one of which is Muse (played by Barkhad Abdi in his first acting role). This guy was great. You’d think they really hired a Somali pirate. He’s also sympathetic enough where he isn’t just a crazy villain. Billy Ray’s script makes him a fully formed character. There are even scenes set in Somalia so we knew where these guys are coming from. Abdi is terrific in the role and certainly holds his own against the veteran Hanks. All four actors who portray the pirates are terrifying, intense and give excellent performances.


“Captain Phillips” is an exceptionally made film. The camera moves fast and there are lots of quick cuts. It’s a style we’ve become accustomed too in Greengrass films, but they make sense in context of the stories he’s telling. If the film has any fault it may be the film’s final act isn’t quite as gripping as what has come before it. I was unaware that the pirates actually end up taking Phillips hostage by himself, leaving the crew behind, which makes for slightly less tension, especially if you know the outcome. However, this is one riveting film and everything from the music score to the grainy cinematography are all top notch.


Fans of Tom Hanks and realistic action thrillers will certainly be pleased with the fact-based “Captain Phillips.” It’s powerful, suspenseful, and features fine acting work; though the film’s second half isn’t quite as riveting as the first. It’s a lot like Greengrass’ “United 93” - and almost as intense - without all the uncomfortable feelings associated with having to watch a dramatization of 9/11. Perhaps Hanks will receive what would be a well-deserved Oscar nomination if things go his way. He doesn’t quite do anything we’ve never seen before, but he’s certainly the master and commander.  GRADE: A-
Posted by Chris at 10:28 AM