Prom Spite: There’s a New “Carrie,” Let’s Deal With It 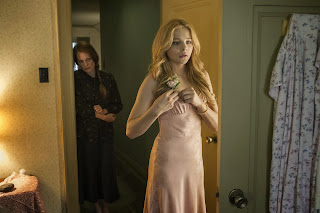 Yes it’s true; a new version of Stephen King’s “Carrie” doesn’t need to exist. But it does, so we’ll all have to deal with it. I’m okay with it mostly because Brian De Palma’s 1976 thriller “Carrie” was never one of my favorite films in the horror genre. To me, it wasn’t so much horror as a science-fiction drama. It’s about a lonely outcast teenage girl who becomes the butt of her classmates’ cruel joke and gets her revenge by using her telekinetic abilities to kill them all. Though De Palma’s film is a prime example of classic 1970s filmmaking and it was a product of its time and no one had seen anything like that (and, for a frame of reference, the slasher genre hadn’t even really started yet).


Setting this story in modern day in an era of Facebook and YouTube is interesting, but there’s still something just weird about this story being filmed in 2013. Here the character of Carrie doesn’t feel so much like a social awkward outcast with mental powers as she does like one of the X-Men ready to take down anyone who’s against the mutant movement. Not to mention the whole idea of bullying and classroom violence give the whole thing a mild bad taste, as relevant as it may be. Having said all that, there’s actually nothing technically wrong with director Kimberly Pierce’s (“Boys Don’t Cry”) new “Carrie.” If the worst thing about it is that it doesn’t need to exist is that really all that bad? Besides it’s already been remade as a TV movie and a sequel was produced in the 90s to cash in on the post-“Scream” boom.


Carrie is played by teen actress Chloe Grace-Moretz who’s gained some popularity with her portrayal of Hit-Girl in the “Kick-Ass” films. She’s also no stranger to remakes as she starred in “Let Me In” an American redo of a Swedish vampire movie. Here she gives it her all as the outcast Carrie. She’s dealing with her super-religious (read: nutjob) mother played gamely by Julianne Moore (who’s also no stranger to remakes having participated in Gus Van Sant’s dreadful “Psycho” experiment). One thing most viewers will notice is that the film opens with Moore giving birth, alone in her bed. She almost stabs the baby with a pair of scissors. Cut to Carrie as a teenager in gym class where she gets her period in the locker room shower. Her horrible classmates respond by chucking tampons at her with one of them now filming the incident on her cell phone. Hey I’d probably massacre them all at the prom too.


And here is the one fundamental flaw of this story: the depiction of Carrie’s evil classmates. They’re horrendous, despicable people. In the film’s final act, you root for Carrie to slay them all. You’re not scared for them. And therefore it’s not all that scary; especially since the entire school begins laughing at her when a bucket of pig blood is poured on her. Director Kimberly Pierce wisely modifies some things about this sequence. This time no one truly laughs at Carrie in this moment. It would only be funny to see a girl get blood poured on her if it was the popular girl. However, no one wants to see the school outcast literally being tortured in front of the whole school.


But for every good decision Pierce makes there’s also a bad one here and there (She wisely chooses not to recreate the split screen compositions from the original film). This is just a mild nitpick, but I didn’t like how Moretz moves her hands to make objects fly around. It makes her look silly not scary. Not to compare too much to Sissy Spacek’s iconic performance, but she moved stuff with her eyes, no hands needed. Plus she just looked creepy. Moretz is too pretty to play someone doing something so evil. She doesn’t really look like an outcast so it’s hard to believe her as one. Otherwise she does give a good performance. I also liked Judy Greer, who’s usually playing funny, in a serious role as a nice gym teacher who is on Carrie’s side. She works great with the teenage girls cast as Carrie’s mean girl enemies.  Portia Doubleday is deliciously wicked as Chris (originally played by Karen Allen) whose idea it is to dump pig’s blood on Carrie. And Gabriella Wilde plays a very relatable girl who sees the errors of her ways. The male characters aren’t given all that much to do, but it’s nice to see a large female ensemble in something other than a romantic comedy.


“Carrie” is a completely competent film. Is it necessary? Not really. Did I enjoy it? Sure. There’s nothing flat out wrong here. The performances are good (I certainly enjoyed Moore’s kookiness), the script is good but familiar, and there’s a certain foreboding leading up to the inevitable prom sequence. It doesn’t quite play with our expectations; we all know what’s coming. So it plays things rather safely. Make too many changes, and the original film’s fans will balk; don’t make enough changes, and fans will complain as well. With a horror remake sometimes you just end up in a no-win situation. Somewhere I have to think that when the filmmakers decided to make take this one on there was a voice urging them not to and whispering, “They’re all gonna laugh at you.” However, it’s certainly not laughable because there are remakes far worse than “Carrie.”  GRADE: B
Posted by Chris at 4:01 PM