The Old Man and the Wee: “Bad Grandpa” is a Tasteless But Pretty Darn Funny Romp 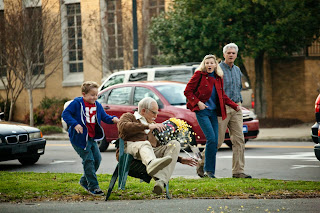 You really can’t give a movie like “Jackass Presents: Bad Grandpa” the same kind of review as any other film. It’s from the people who gave us the wacky and altogether disgusting antics of the Jackass TV, and ugh seriously, film series; however, there’s something here that those other gross out adventures failed to provide: some kind of story. And here we have it as perennial buffoon Johnny Knoxville plays a grumpy old man named Irving Zisman who must take his precocious grandson across country to be with his father. The catch is a majority of the film’s “characters” are actually real people caught in the Jackass group’s web of silly pranks and stunts. The major problem with this method is that we’ve seen a lot of this stuff before in both “Borat” and “Bruno.” Both of those Sacha Baron Cohen gems have a lot more to say about humanity than “Bad Grandpa” does. But there’s something special about the pairing of an old man and a young boy that adds another layer of hilarity so it leaves “Bad Grandpa” with something Cohen hasn’t yet given us – though the funny Brit’s films are undoubtedly superior.

First things first. Knoxville, I believe, is actually talented. He’s actually funny. There’s a reason he’s been relatively successful. He also makes a decently convincing old man with the help of some a well-done makeup job, of course. If people don’t believe he’s an old guy none of this would work. The story is simple. After Irving’s wife dies, his adult daughter is sent to prison, again, for drugs and that leaves her young son Billy (a one in a million find named Jackson Nicoll) in need of parental supervision. The boy has a father but the guy doesn’t love the kid – he only wants child support payments. Irving reluctantly agrees to drive across country to bring the tyke to his father. After all, this old man can’t be bothered with having to take care of a young child; he should hardly be allowed to take care of himself.

That’s about it for the film’s story and what we’re left with is vignette after vignette of Irving and Billy getting into lots and lots of, sometimes utterly ridiculous trouble. There are moments of pure tastelessness. Take for instance the staged funeral for Irving’s wife in which unsuspecting mourners watch in horror as a family argument ends up with the deceased body being tossed from her open coffin. Later, Irving hires real moving men to help him carry his wife’s dead body to the trunk of his car. He thanks the two men (who actually go along with it) for helping him basically commit a crime. Irving even attempts to just mail his grandson in a giant box that the takes to a local shipping company. The two women gasp as the prospects of an old man attempting to ship his grandson – for a moment you think they may actually do it. One finally quips, “Should we call 9-1-1?”

The success of a movie like this rests solely on whether these little skits are even funny. I do believe they’re funny. Some more so than others, of course. Irving’s attempt to have “relations” with a vending machine resulting in his rubbery genitalia getting stuck is just more odd than truly hilarious – it’s almost too unrealistic to think anyone would fall for it. But these people have found people who actually believe it. And then we can’t believe that they believe it.

As funny as Knoxville can be in the role it’s the guy’s young co-star who steals the spotlight. The young Nicoll who has a handful of film credits, is certainly a wonder to behold. It’s amazing seeing this tiny wonderment of improvisation interact with real people. It would put many up and coming comedians to shame. Take for instance the boy’s exchange with a man who he asks to tie his shoes. The conversation soon turns into “Will you be my dad?” and the kid goes on and on, never faltering once. The flabbergasted man looks around desperate for some parental relief. And we sit in amazement at the kid’s talent that feels miles beyond his years. Add to that the film’s amazing finale in which the boy and his grandpa crash a child beauty pageant. It’s priceless. Director Jeff Tremaine stages these sequences nicely finding most likely showing us the funniest outcomes.

Overall “Bad Grandpa” is really funny. If you’re a fan of cringe, silly, or inappropriate humor or the work of Sacha Baron Cohen you’ll find much to enjoy here. It doesn’t really carry the social commentary that gave much more weight and significance to “Borat” and “Bruno” (and it certainly isn’t quite as overall funny) but it’s definitely good for a few belly laughs.   GRADE: B
Posted by Chris at 6:16 PM