Django Chained: “12 Years a Slave” is a Powerful Film About America’s Shameful Past 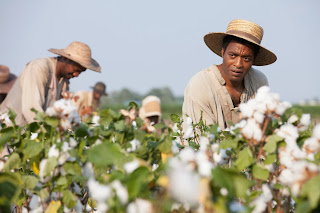 Comparing “12 Years a Slave” to something like “Schindler’s List” is a warranted argument. They’re both epic-feeling true accounts about horrible times in human history. Slavery remains an atrocious and embarrassing stain on United States history and it’s here we see the ugly truths unearthed, as if for the first time. There have been plenty of depictions of this dark time but finally we have a motion picture with the horrible – and sometimes graphic – truths mixed with a simple, straightforward true story that will most likely appeal to a wider audience. Many people balked at Steven Spielberg’s harrowing slavery drama “Amistad” not so much for its brutal depictions, but for the film’s boring courtroom scenes which grinded the narrative to an unfortunate halt. In “12 Years a Slave” we’re presented with the true account of a free Black man from New York who was kidnapped and sold into slavery in the 1800s and his twelve year struggle to become the free man he always legally was. It’s unflinching and moving.


“12 Years a Slave” is directed by Steve McQueen who directed Michael Fassbender as a sex addict in 2011’s brilliant drama “Shame.” Some of the images in “Shame” were pretty shocking, yet beautiful, and that’s no less true here. Chiwetel Ejiofor is the real life Solomon Northup. Living a happy life in Saratoga, NY in the 1840s, Solomon is married and has two children. He works as violinist. He gets a potential job offer from two men who escort him to Washington DC. There he’s drugged and kidnapped and taken to New Orleans where he’s illegally sold into slavery. He’s first under the ownership of plantation owner William Ford (Benedict Cumberbatch) where his engineering skills make fellow master John Tibeats (Paul Dano) extremely jealous and after threatening his life, is sold to the film’s cruelest plantation owner Edwin Epps (Fassbender) and his equally heartless wife Mary (Sarah Paulson). It is here that Solomon, who’s forced to work under the new name Platt, faces his hardest times. Epps, whose plantation is of the cotton variety, is a hopeless drunk and beats up most of his slaves even when they do a good job. Patsey (Lupita Nyong'o – one to watch out for in award season), a meek slave woman, who picks no less than 500 pounds of cotton is beaten nearly to death after acquiring a bar of soap to wash up with.


This altogether moving film – which works mostly because we know it’s based on a real life person – features some tremendous talents. McQueen (who plays things a touch safer here than in "Shame") has a skilled eye and makes some rather beautiful compositions with cinematographer Sean Bobbitt. Hans Zimmer who provides the melancholy score and is miles away from his bombastic trademarks as heard in “Inception” and “TheDark Knight Rises.” Screenwriter John Ridley, who adapts Northup’s own book about his own hardships, makes this movie not just for an African American audience but for everyone. As a white person, I couldn’t feel farther removed from Solomon’s troubles and yet I felt every emotion that he was going through. That’s due to Ejiofor’s solid performance. The entire all-star cast including appearances by Brad Pitt, Paul Giamatii, and Alfre Woodard does a great job no matter how brief their role.


It’s difficult to make comparisons, but as two movies depicting life as an African American, “12 Years a Slave” is leaps and bounds better than this summer’s “The Butler.” That film felt like a sugar-coated look at life in a post-slavery, pre-civil rights America. “12 Years a Slave” is so much more honest, real, intense, potent, emotional, and ultimately more resonant. Even if both sort of feel like traditional "Oscar bait" this movie is worth biting. It’s also easy to be blindsided by the text “based on a true story” but if anything else, this film is a powerful and historically accurate portrayal of African American slavery. It’s a film that will no doubt become a teaching tool in classrooms around the country. And it’s a good thing too, because everyone should see it.  GRADE: A-