The Girl Who Played with Fire: You Won’t Be Starved for Entertainment After Seeing “The Hunger Games: Catching Fire” 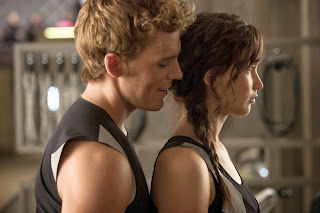 There’s an old saying, “Second is best.” When it comes to The Hunger Games film series that just may be right. While the original “The Hunger Games” remains a wonderful starting entry in an increasingly successful series, “Catching Fire” remains the more engrossing of the two by being able to explore the characters and world that was so well conceived in the first film. Katniss Everdeen remains an intriguing, strong, and defiant young female character wonderfully brought to life by recent Oscar winner Jennifer Lawrence. Director Francis Lawrence has crafted a tight and captivating motion picture created from an equally fascinating script full of surprises (at least for those of us who haven’t read the best-selling books).


It must be said that the ending of “Catching Fire” is a deliberate, and glorious, rug pulled out from under you moment. It’s an obvious set up for another film, and therefore there really isn’t very much of a “climax.” However, the way it’s handled here is quite exquisite; it kind of works as a twist. It totally catches you off guard. I loved it. Bravo. Everything else that came before it is equally amazing. As you recall from the first film Katniss and her male district Hunger Games counterpart Peeta (Josh Hutcherson) were the winners of the 74th annual Hunger Games – the violent kill or be killed televised series that acts as a buffer between an evil totalitarian government and varying districts of wealth and poverty in Panem. The government hates Katniss especially ruler President Snow (Donald Sutherland) and basically wants her removed as she’s become a symbol of hope for the less fortunate districts. To prevent a possible further uprising new game master Plutarch (Phillip Seymour Hoffman) contacts a special version of the Hunger Games in which the players reaped for the 75th annual games will come from previous winners. Unfortunately that means Katniss is basically forced to play again because she’s the only winning female contestant.


The concept of having the Hunger Games involve past champions is utter genius concocted by author Suzanne Collins. It adds a delicious new spin on something that would have been otherwise all too familiar. It also is a way that makes it possible for the series’ heroine to participate. And Lawrence really sells it too – the look of fear, disgust, and sadness that comes over her as this announcement is made is simply heartbreaking. By also focusing on surviving characters Peeta and Katniss we get to learn so much more about them than what was presented with us in the first film. You get the sense of love Peeta feels for Katniss that she doesn’t return. She loves Gale (Liam Hemsworth), another member of her district, who was shamefully underdeveloped in the first film. You finally get a real sense of this love triangle that wear mearly hinted at previously.


Katniss and Peeta are forced into portraying a love for each other that doesn’t really exist. It’s all for show of course. Katniss defied the Capital by forcing a tie between her and Peeta. Snow reprimands her by forcing her to sell this fake love story or her family will be killed. Of course, he plans on her being killed off in the 75th games anyways. However, there is something else brewing in Simon Beaufoy and Michael Arndt’s clever script.


The film’s second half which includes a tropical themed Hunger Games is skillfully plotted and highly intense and imaginative. There are some new players that Katniss and Peeta team up with including Finnick (Sam Claflin) and Johanna (Jena Malone) who seem like real threats but have other things in mind. And fascinatingly enough, while the Hunger Games are usually played by children and teenagers, since this new version is made of previous winners there are adults her as well. One of which is a wordless old woman played charmingly by Lynn Cohen.


I can’t say enough good things about “Catching Fire.” There are no real words to describe how enthralling it all is. The performances are great especially scene stealing fan favorites Elizabeth Banks as Effie and Woody Harrelson as Haymitch. The direction is solid. The film borrows the look of the first film, but the camerawork feels more restrained. The music, editing, costumes and effects are all top notch. The film does a great job of taking what you learned in the first one and playing around with it. You get to learn so much more about Panem and this fascinating yet horrible world. It is such a great conception from Collins that’s wonderfully transplanted to the screen. And oh that ending! I can’t wait for the next entries – bring on “Mockingjay – Part 1.”  GRADE: A
Posted by Chris at 11:01 PM