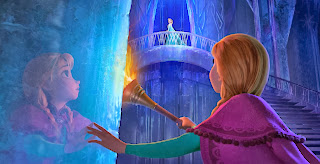 How did Disney do it? How did the animation studio get their groove back? It started when they decided to take another stab at fairy tale musicals with 2009’s “The Princess and the Frog” (though let’s not forget the excellent animated-live action hybrid “Enchanted”). It was a mild success but things really got good with the computer animated Rapunzel romp “Tangled.” Last year’s song-less video game ode “Wreck It Ralph” was an ingenious bit of originality that gave Pixar a run for its money. And now we have another CGI princess tale with the male friendly title “Frozen.” Oh it’s a musical? The trailers could have fooled me, but nothing in its male-friendly marketing (which started with the “Tangled” campaign) gave me much hope. I have to say however, that “Frozen” is actually, positively, destined to be a modern Disney animated classic in every sense of the word.

“Frozen” has everything you want in a great animated Disney musical. Even if the title isn’t a reference to the character’s names (like “The Lion King” or “Aladdin” for instance) this Disney-fied version of Hans Christian Anderson’s “The Snow Queen” is delightful, beautiful, funny, and emotionally satisfying. There’s way more backstory that most Disney films: two child princess sisters become estranged when sister Elsa accidentally harms her younger sister Anna with her magical ability to create ice and snow. When Elsa is eventually crowned the queen of the Norway-like Arendelle , she storms off into the mountains when she accidentally turns her kingdom into a snowy winter wasteland. A grown up Princess Anna (voiced by Kristen Bell) sets off to find her sister home.

This movie works for several reasons. The film’s screenplay from Wreck It Ralph writer Jennifer Lee has a knowing self-awareness which works in this day and age. For instance, Anna quickly falls in love with Prince Hans (Santino Fontana) after meeting him after a day. This was something spoofed in “Enchanted.” Anna sets off with a rugged ice trader named Kristoff (Jonathan Groff) and his reindeer pal Sven.  The pair is quickly at each other throats, but I’m sure you can guess that these two are actually meant to be. They’re also joined by one of Disney’s most amazing sidekick characters - a talking snowman named Olaf (Josh Gad) who longs for summer. The characters’ chemistry is simply extraordinary.

It’s rare for a Disney film to feature two fully formed female lead characters. I figured that the misunderstood Elsa would eventually become the film’s trademark evil villain, but not quite. Any Disney animated fan who is expecting a well-defined tradition villain is likely to be disappointed. But alas we get TWO new Disney princesses for the price of one, so all’s not lost. Anna and Elsa’s story is so well developed I can’t believe how much I was actually moved by the film’s emotional conclusion. The film actually reminded me quite a bit of the Broadway hit “Wicked” with the friendship of witches replaced by a strong sister relationship. It makes sense after all since Elsa is voiced by Tony winner and Wicked veteran Idina Menzel.

You can’t discuss “Frozen” (or any Disney musical) without mentioning the songs and music. No one could ever, ever, EVER replace the late Howard Ashman who breathed new life into the early 90s classics that are simply untouchable. “Avenue Q” and “Book of Mormon” composer Robert Lopez (working here with his wife Kristen Anderson-Lopez) have taken the reins and have created some very memorable Broadway-like songs. They feel like Disney songs and are catchy including Elsa’s moving solo showstopper “Let It Go.” It’s paired with some truly stunning computer animation. Composer Christophe Beck provides a very nice music score.

The days of traditional hand-drawn animation are over unfortunately, but “Frozen” is truly a worthy CGI successor. Disney has created magic yet again and while the beautiful animation can never truly hold a candle to the 2D animation of our youth, they have crafted a wonderful tale that is every bit as fun and resonate as the classics Disney churned out year after year in the 90s. It’s definitely my favorite Disney Animated Classic since 1999’s “Tarzan.” It feels a bit more hip and modern without ever making stupid pop culture references ala Dreamworks. “Frozen” is fun for all ages and will certainly please the cartoon loving kid in all of us.  GRADE: A
Posted by Chris at 12:02 AM