Despicable Me: The Electric “The Wolf of Wall Street” is Delightfully Depraved 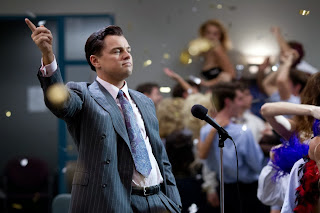 Director Martin Scorsese is like a fine wine. He only gets better with age. As the 71-year-old man settles into old age he continues to make offbeat, simply astonishing films. “The Wolf of Wall Street” is certainly no exception. It’s a film brimming with energy and even at 3 hours in length never contains a dull or wasted moment. A far cry - in style, tone, and subject matter - from his last picture, the terrific family-friendly ode to silent French cinema “Hugo,” but no less cinematic and beautiful, “The Wolf of Wall Street” features a towering performance from Leonardo DiCaprio as a real life Wall Street millionaire whose debauchery and excessive use of both drugs and women eventually cause his complete and utter downfall.  Scorsese and DiCaprio have always had a great filmmaking relationship over the last decade and here is where both of their abilities have just simply crested into the ultimate Scorsese/DiCaprio collaboration. It’s outstanding work.

To think that just two years ago Martin Scorsese was getting so much attention for his film Hugo. It was mostly due to the fact that the once gritty filmmaker, who had helmed 70s classics “Mean Streets” and “Taxi Driver” was making a PG-rated family film about an orphan boy’s misadventures in a Paris train station was enough to turn heads. The film ended up a masterpiece that only worked because Scorsese is such a master storyteller, both figuratively and visually. It turned out to be a terrific film that just happened to not contain a single profane word or any drugs. And here we are now with “The Wolf of Wall Street” a film that has turned just as many heads as it once courted an NC-17 rating for its sometimes borderline explicit content. Oh yeah and it’s his longest film to date clocking in at 179 minutes. But is it any good? Hell yeah.

Leonardo DiCaprio gives one of his absolute best performances as Jordan Belfort a real life stockbroker who quickly worked his way up the ranks of Wall Street to become an eventual multimillionaire. Of course, he didn’t quite do it all legally. He’s quickly told by his boss (a brief but memorable Matthew McConaughey) to adapt a life of drugs and sex. Injected with a renewed sense of “I can do anything” he begins selling penny stocks in large quantities to people who can’t afford it. He builds his own company with his equally immoral friends from the ground up and becomes the wildest and craziest CEO on Wall Street. We’re talking prostitutes, tossing midgets, naked marching bands here. He eventually attracts the attention of the FBI (including Kyle Chandler) who are suspicious of his extreme lifestyle. And so sets a three hour journey of corrupt business ethics, immoral behavior, deviant drug and sexual content, and some of the wildest and most eccentric filmmaking you’ll see all year.

The film is based on Belfort’s own memoir he published in 2007 after serving some time in prison for fraud and all that jazz. Terence Winter (who created HBO’s “Boardwalk Empire”) adapts the book into a simply delightful screenplay. It features some offbeat elements – like breaking the fourth wall – that isn’t even remotely new to the medium, but works wonders here. Belfort is pretty much a despicable, immoral person yet the combination of tight writing and DiCaprio’s brilliant performance make us cheer him on – to an extent of course. If TV’s Breaking Bad can make us root for a family man turned drug kingpin, Martin Scorsese makes it just as easy to root for this degenerate of a human being. He makes his lifestyle seem fun and wild, showing over and over again in gross excess just how crazy things get. And that’s the point. If you are still cheering Belfort on by the third act you might have to look at yourself in the mirror. There is definitely a point in which it just all goes to far and you’re forced to realize just how horrible and empty Belfort’s life truly is. It’s up to the viewer to figure out when the moment comes.

“The Wolf of Wall Street” certainly isn’t for everyone. There is some pretty raunchy content here. The fact that the film’s overall tone is actually pretty comedic helps soften the impact of so much extreme drug use, f-bombs, and in-your-face sexual content. There’s a perfect balance of tone helped by equally moving and funny performances. Jonah Hill is simply outstanding here as one of Belfort’s right hand men.  Even Margo Robbie in a limited role as Belfort’s beautiful wife does much more with her role than one would expect. What an outstanding cast and crew that has simply made one of the year’s most entertaining films.  GRADE: A
Posted by Chris at 6:08 PM

Even if youre not affluent abundant to rolex replica watches allow a Patek Philippe for your collection, there are added automated watch brands aural the ability of added boilerplate collectors. In fact, the industry is seeing a rolex replica about-face in watch absorption to adolescent collectors. Yes, even those in their 20's and 30's who accept the agency are searching at alpha and furthering watch collections.Watch-wearing saw a replica watches uk abatement as adaptable phones became commonplace, but timepieces are now generally apparent as both a appearance account and a way to accurate individuality.