Breath Becomes Her: There’s Nothing Artificial About the Intelligence in “Her” 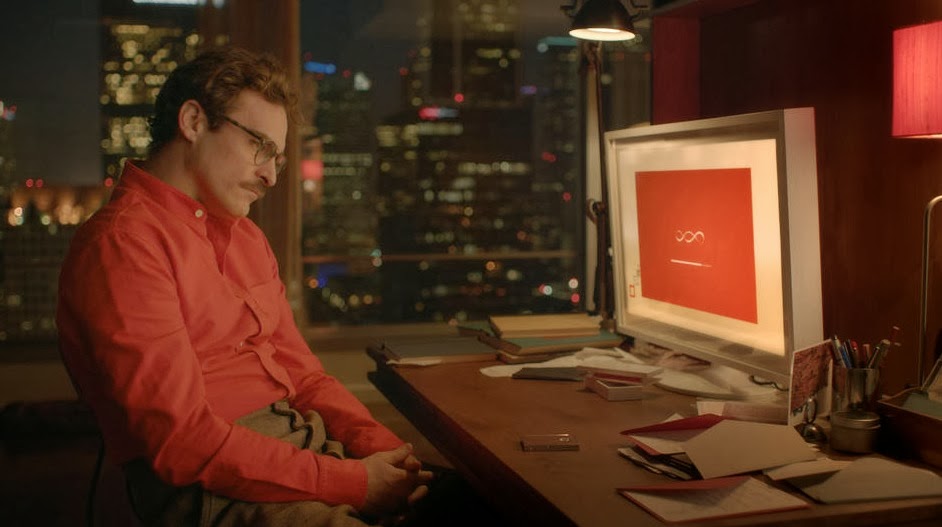 Leave it to the weird auteur Spike Jonze to give us one of the most touching love stories of the year. A man falls in love with his computer’s operating system. It’s bizarre, it’s fascinating, it’s oddly touching, and strangest of all if feels like a disturbing prediction of where our society is headed. Jones has crafted a beautiful movie about man’s dependence on technology. The film is set at some point in the future it doesn’t feature flying cars or hoverboards but our obsession with computers is very apparent and sets the background for one of the year’s strangest love stories.

Joaquin Phoenix gives a tremendously effective performance as a lonely man named Theodore. He's not like the socially awkward weirdo Ryan Gosling played in "Lars and the Real Girl."  He’s in the middle of a separating from his wife (Rooney Mara) and he doesn’t appear to have many friends. Although one of them is a cute married woman played by Amy Adams. He also seems to have the most awesome job ever. He works for an internet company that writes love letters for people. He talks to his computer and what he says is transcribed in handwritten form. Isn’t future technology cool? (And apparently all men in the future wear their pants up to their bellybutton). One day Theodore sees an ad for a new talking operating system featuring artificial intelligence. He purchases it and after some calibrating begins conversing with his new female computer who names herself Samantha. She’s voiced by Scarlett Johansson and though the actress is never once seen on screen gives a simply outstanding voiceover performance.

The two hit it off immediately. The two of them sort of become enamored by each other and in one of the film’s weirdest yet beautiful sequences begin to become “intimate.” From there it seems like Samantha's world has been opened and she wants to know what it’s really like to be human. The two bond with each other and fall for each other in a way most onscreen couples only attempt to portray love. It’s sometimes odd but always touching. At one point Samantha even suggest a body surrogate so that Theodore could experience a physical body. Just when you think things can’t get any weirder they do.

Director Spike Jones, receiving his first solo writing credit, has created such a strange and fascinating world. And the film isn’t nearly as “out there” as his previous efforts with writer Charlie Kaufman. As strange as the film is at times, it plays things rather safely in a way – yet you never quite know where it’s going to go. He doesn’t use many fancy camera tricks but the film is scrumptiously shot by director of photographer Hoyte Van Hoytema who shot the equally beautiful “Let the Right One In.” Jones paints such a fascinating future without ever giving into the science-fiction clichés we’ve come to expect in films. He gives the film just a dose of fantasy yet it’s oddly realistic. And hence the entire point of the film. We’ve become a society nearly completely on technology. We’re all people looking for connections yet we rely on our phones and computers to make them. You could write an entire dissertation on this stuff.

“Her” is completely charming, beautiful, and entertaining. The Theodore-Samantha romance is weird yet, but Jones really makes it believable. He really makes it work. It’s such a smart, tight script and everyone involved gives tremendously affecting performances.  GRADE: A-
Posted by Chris at 7:47 PM

Cool you gave it a A- and not the A+ everybody else has given.

This article is interesting and useful

His article is very helpful at all thanks