Brawl in the Family: “August: Osage County” is a Darkly Comedic Family Drama 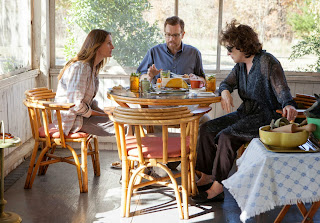 The Pulitzer Prize and Tony-winning stage play “August: Osage County” seems like it should be the ultimate Oscar movie. It has an all-star cast, over-the-top scenery chewing performances, and the power of the Weinstein Company behind it. And it’s good. But you know what? It’s dark. It’s really dark. It’s basically a black comedy and I can’t imagine this thing being very popular with an average movie-going audience. I sort of feel bad for the uninformed old women who go into this expecting a “Steel Magnolias” tale about Southern family dysfunction.  Having said all that I really enjoyed the film, a minor nitpick here and there, but it’s a solid effort that includes a stellar ensemble truly giving their all.

Meryl Streep is Violet the pill-popping matriarch of the Weston family in the middle of nowhere Oklahoma. Her husband has disappeared and some family comes over to comfort her. Violet is suffering from mouth cancer and wears fancy black wigs to cover up her withered, cancer-stricken hair. Did I mention she pops pills? A lot. And she acts crazy sometimes. She appears to be trying to out-act Ellen Burstyn in “Requiem for a Dream.” Her only daughter who still lives in the area Ivy (Julianne Nicholson) shows up, where the single woman is mocked by her mother for not being in a relationship – or at least one her mother doesn’t know about. Then daughter Barbara (Julia Roberts) shows up with her husband (Ewan McGregor) and daughter (Abigail Breslin). Her marriage is on the rocks. Violet’s third daughter played by Juliet Lewis flies in from Florida with her new fiancé in tow (Dermot Mulroney). Violet’s loud mouth sister Mattie Fae (Margo Martindale) also comes over with her husband who’s played by Chris Cooper. Their misfit grown up son is played by Benedict Cumberbatch. There’s also a Native American woman around who was recently hired by Violet’s husband before he disappeared. Violet keeps calling her an “injun.”

Have the fun of discussing what goes on in this film would spoil all of the various plot elements and character reveals and that’s just no fun for someone who hasn’t seen the film. Let’s just say that while the family is coping with what ends up turning into tragedy, lots of dirty laundry begins to be aired out. Fights and arguments ensue, insults are thrown. And most of this is actually funny because you sit there and think “And I thought my family had problems!”

A movie like this only works because of two things: one is the script from Tracy Letts who wrote the original play. He has a habit of writing darkly comic dramas about really messed up people (see, “Killer Joe” and the even weirder thriller “Bug”). It’s a tight script filled with lots of dialogue and monologues. And the actors are all very good. And best of all they have great chemistry with each other. They really feel like an extended family. And you really get a sense of peering into a family at time of grief. It just may be too much for some to handle as it goes into unexpected areas. It keeps things fresh and interesting. After all, the original source material is a play and there’s basically only one setting. Director John Wells does a good job making it cinematic without ever overdoing it. This is a simple story with complex characters and lets the actors do their jobs.

“August: Osage County” is a very well-done movie. If anything my only real complain, or make that an observation, is the slight sense of overacting a bit here and there. Ms. Streep, one of our finest living actresses almost overdoes it a few times. Anyone who thought her great performance as Margaret Thatcher was over-the-top will most likely look at her aghast in this film. But you know what? Her character is a pretty crazy. She’s weird, she’s mean, she’s outlandish. It makes sense. I have little to complain about here otherwise this feeling sort of like the Oscar-bait I’m sure most of the actors expected.  There’s nothing particularly wrong with that as every movie shouldn’t be judged based solely because the film seemed to have been made to win awards. And these days they usually don’t anyways. Go see “August: Osage County” for its great cast and darkly comedic story. This is a pretty heavy drama with unexpected twists. I pretty much dug it.  GRADE: B+
Posted by Chris at 7:46 PM