There’s Something About Mary: Disney Works His Magic Again in “Saving Mr. Banks” 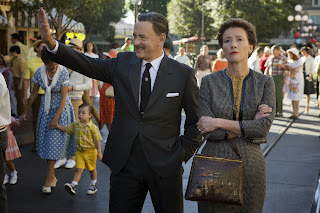 If ever there was a movie ready to conquer the Academy Awards it’s surely “Saving Mr. Banks.” It’s a based on a true story period piece, it’s about Hollywood, it’s told in a back-and-forth narrative style, and it features key performances from well-known stars. It’s about Mary Poppins author P.L. Travers’ unflinching stubbornness in giving up the screen rights to her beloved character and Disney’s attempts to develop a film adaptation (think the Disney version of “Adaptation” and “Hitchcock” – kind of). Walt Disney himself spends weeks convincing Ms. Travers to let him adapt her books. I was unsure of how the development of the classic Disney film “Mary Poppins” could be all that fascinating a story and yet here it’s presented as nothing short of captivating. Like Travers herself I was finally won over and that’s no surprise given the talent here; and no spoiler of course since we all know “Mary Poppins” became a successful award-winning film.

Right off the bat, it’s amazing that “Saving Mr. Banks” is actually as successful as it is. After all, we all know the outcome of the central conflict: Disney does get the rights to the novels and adapts them into a screen version. It’s the journey that we take that’s interesting. Screenwriters Kelly Marcel and Sue Smith use a back and forth narrative structure chronicling Mr. Walt Disney’s (Tom Hanks) wooing of author P.L. Travers (Emma Thompson) in 1961 while also giving us flashbacks of Travers’ childhood in Australia in the early 1900s. Travers is instantly presented as a stubborn, uptight, shrewish woman. A bitch, if you will. She adores her books and despises everything that Disney represents. Frankly, I’m amazed The Walt Disney Company even made this thing.

Thompson really embodies her role. She scoffs at the idea that two song writing brothers are planning on turning the film into a musical. And she makes Walt promise that the film will contain no animated sequences. There’s no real reason given as to why Travers was so darned demanding. After all, authors had been seeing their works adapted to the screen for years and years. That is what those random Australian flashbacks are for. Travers is portrayed as a young girl by Annie Rose Buckley. Colin Farrell gives a good performance as her banker father. The two share a special relationship, but things become strained when he becomes financially unsuccessful and turns to alcoholic which puts a serious strain on the entire family. You slowly begin to see how Travers became who she is and why she refuses to see her novels (there were four at the time) turned into a silly romp.

Meanwhile, back in the 1960s Los Angeles, Travers refuses to budge as Mr. Disney, his song writers (played by B.J. Novak and Jason Schwartzman) and screenwriter (played by Bradley Whitford) present her with concept art, songs, the script (which she throws out the window) all while insisting on being audio recorded (an actual audio recording is played during the closing credits). It’s cool getting a behind the scenes look into the workings of something we all know the outcome to.

The film really shines though when both Hanks and Thompson are on screen. The two play off each other extremely well. Hanks’ jolly demeanor and Thompson’s cold introversion is a simply wondrous joy to witness. I’m glad that director John Lee Hancock (who helmed the similarly optimistic but overwrought “The Blind Side”) doesn’t sugarcoat things as much as I would assume he would. He presents Travers as sort of a jerk and we slowly get to see what made her this way. The constant crosscutting almost feels like a nuisance but it eventually finds its rhythm.

While it’s not quite one of the year’s best films “Saving Mr. Banks,” with all of its spoonful of sugar goodness, did win me over. I enjoy a good Hollywood tale and this film is certainly easily digestible. I can see a slew of Oscar nominations coming – though I feel it’s a little too safe and tidy to go all the way – but it’s certainly worth it for the great performances, interesting story, and a divinely whimsical Thomas Newman score. While the crosscutting takes a while to find its footing, the film is pretty solid; like Travers herself, it won me over in the end. GRADE: B+
Posted by Chris at 4:15 PM

You know what? They are both right. Buying a customized hublot replica does not come without risk, but there are also rewards. First, for the most part, you invalidate any remaining rolex replica sale warranty (which isn't the end of the world - especially on a watch that is already out of warranty), and cartier replica sale you also greatly risk inhibiting future resale value. Of course, that latter element really depends on the fake watches customization. Most customized fake rolex sale watches today fall into two camps. One is aftermarket diamond or jewelry setting (though, I always recommend factory stones from rolex replica since they can't be beaten), and the second is color or design changes to the Rolex case and dial.