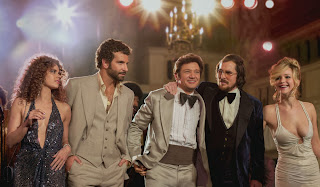 Maybe I was pampered with last year’s amazing Best Picture winner, the 70s set “Argo,” but I think I wanted more from the retro “American Hustle.” I wanted to cheer at the end like David O. Russell’s previous efforts “SilverLinings Playbook” and “The Fighter.” “American Hustle” based on the real life ABSCAM FBI operation of the 70s/80s. Russell again has collected a delightfully perfect cast made up mostly from his last two films who all give tremendous performances. There’s good music and good camerawork and while some characters have a few emotional scenes here and there it didn’t quite get me. And the plot that goes around in circles as it double crosses every which way kept me at a distance for much of its slightly overlong runtime.

“American Hustle” shouldn’t be as confusing as a Lord of the Rings film but much like “Tinker Tailor Soldier Spy” (though not nearly as dense) the film’s story can be difficult to grasp at times. Christian Bale (in what just may be cinema’s worst comb-over) and Amy Adams as Irving and Sydney become lovers and unite by doing small business cons. Soon the embezzlements attract the attention of the FBI where they’re caught by Richie (Bradley Cooper) who insists on using them to bring down other con artists. Did I mention that Irving is married to Rosalyn (a deliciously boozy Jennifer Lawrence) who’s a pretty crazy free spirit who threatens to divorce Irving and take their son away. Meanwhile Richie and Sydney (who spends most of the film in con artist mode as the made up British Lady Edith Greensly) begin to find themselves attracted to each other. Most of these cons involve a New Jersey mayor Carmine Polito (Jeremy Renner) and other political figures who are all being accused of embezzling and fraud or something along those lines.

You don’t need to follow the dense plot material to know that you’re watching truly great performers at work. Bale is simply excellent here doing a fun take on the Robert De Niro persona so many are familiar with. He’s practically unrecognizable. Adams gives one of her most stunning performances and proves she can really anchor a film with a truly great lead performance. Watching go from Sydney to Edith is great to witness. Cooper is wonderful here sporting a fro-like wig and a range that’s pretty amazing. And I’m likely to not be the only one who things Jennifer Lawrence is simply outstanding here and simply steals the movie away from the entire cast. Her role becomes more significant as the film goes on which is odd because I seemed to find myself enjoying the film less as it went on, but her scenes are easily the film’s best.

David O. Russell excels at telling slightly bizarre family dramedies and he does a great job with this cast. The actors are great. I just wish I could get more into the story but it left me kind of distant. Sometimes it was difficult to really grasp all the political connections and how everything really worked but I appreciate this not being a watered down tale of 70s crooks. I’m not quite sure how accurate most of this stuff is (character names have definitely been changed for instance) and that stuff shouldn’t really matter if the film is well-made enough. I just sort of felt that the film begins to go on for a tad too long, but it does have a its funny moments and Russell does a great job balancing the comedy and drama aspects. As slight as it is, Jennifer Lawrence singing along to “Live and Let Die” deserves to be considered one of the best scenes in a movie this year. I liked “American Hustle” a lot, I just didn’t love it.  GRADE: B
Posted by Chris at 3:43 PM

Designed by Gérald Genta, the mind behind the Audemars Piguet Royal Oak (a watch that the replica watches sale was heavily influenced by), it has that solid, timeless look of replica watches that will stick around through trends and fads. There are cartier replica sale in-house movements on some models, but this cheap replica watches version has an IWC calibre 30110, which is a modified ETA 2892. I want to briefly mention a watch that I think presents a real interesting alternative to the Hublot Classic Fusion Titanium. The watch I'm talking about is the hublot replica (Ariel discussed this one a while ago here), the omega replica sports watch that comes on a rubber strap and takes "fashion watches" in a direction they seldom go.