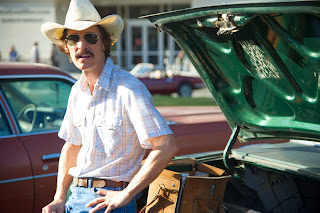 The true life story at the center of the terrific film “Dallas Buyers Club” is a truly fascinating story. Ron Woodroof, who is portrayed as a straight Southern party guy/cowboy is diagnosed with HIV. This is at the height of the 80s AIDS crisis when people were very misinformed about the disease. It was known as a gay disease. How could a tough straight guy like Ron Woodroof get this gay sickness? “Dallas Buyer Club” is a story about transformation. It’s about one man’s physical transformation into a sickly weak man slowly succumbing to AIDS. And it’s also the story of a homophobic man who fears gays transformed into a full-fledged hero supporting the AIDS cause by way of his ‘Dallas buyers club.’


Matthew McConaughey gives the performance of his career as Ron Woodroof. He’s a sickly looking human being. The actor lost lots of weight for his role and it’s pretty disturbing onscreen. He’s a man practically wasted away when he learns that he’s actually HIV positive. The doctors give him thirty days. Screenwriters Craig Borten and Melisa Wallack smartly paint Woodroof has a pretty hateful person at first. He’s a careless human being and it’s extremely difficult to gain any sympathy for him. The film opens with Woodroof having promiscuous sex with two women while at a rodeo. He does recreational drugs. He seems like a person who has nothing to live for and doesn’t care what he does with and to his body. That is until his diagnosis. He refuses to die. And he’s not shy about insisting it’s impossible for him to have HIV because he’s “not a queer.” It’s the realization that a straight person isn’t immune to the disease that sets him out to change not only his life but many others’. He goes from a man spouting out homophobic slurs to a man who violently defends his new transsexual best friend.


While getting treated in the hospital he meets a young transsexual man named Rayon (an equally exquisite Jared Leto). He’s at first scared to Rayon but this is a film about transformation and soon these two will be working together for the greater good. Ron is prescribed a new drug that has been approved to treat HIV. Unfortunately it’s in its early testing stages and it doesn’t quite work very well. Ron goes to Mexico where he gets his hands on unapproved drugs that help a lot more. Soon he’s illegally importing drugs that aren’t FDA approved and selling them to other AIDS patients. He starts a “Dallas buyers club,” one of many real “clubs” that popped up in the United States during this time, where people paid a monthly membership and acquired the drugs for treatment. This went on for some time until the FDA finally waged a legal war against Ron and his unapproved medicine.


Director Jean-Marc Vallée has made a pretty simple yet beautiful and powerful film. He gets truly tremendous performances from his talented actors. McConaughey is transcendent. He’s a far cry from his days as a rom-com leading man. Leto is great as is Jennifer Garner as Dr. Saks who begins to support Woodroof’s cause. Also, Vallée knows that this story is amazing all by itself and doesn’t need any fancy cinematic trickery. It’s really amazing how much you begin to care about Ron. He begins so hateful and becomes a hero. He’s essentially the Erin Brockovich of 1980s AIDS-crisis America. It’s a truly an amazing and moving experience.


I truly loved everything about “Dallas Buyers Club.” Nowadays there are so many movies that are “based on a true story” that it becomes practically insignificant. It’s hard to realize which stories are the truly rewarding ones that deserve to be told onscreen. This is one of those amazing stories that deserves to be told and it deserves everyone’s time.  GRADE: A
Posted by Chris at 5:40 PM