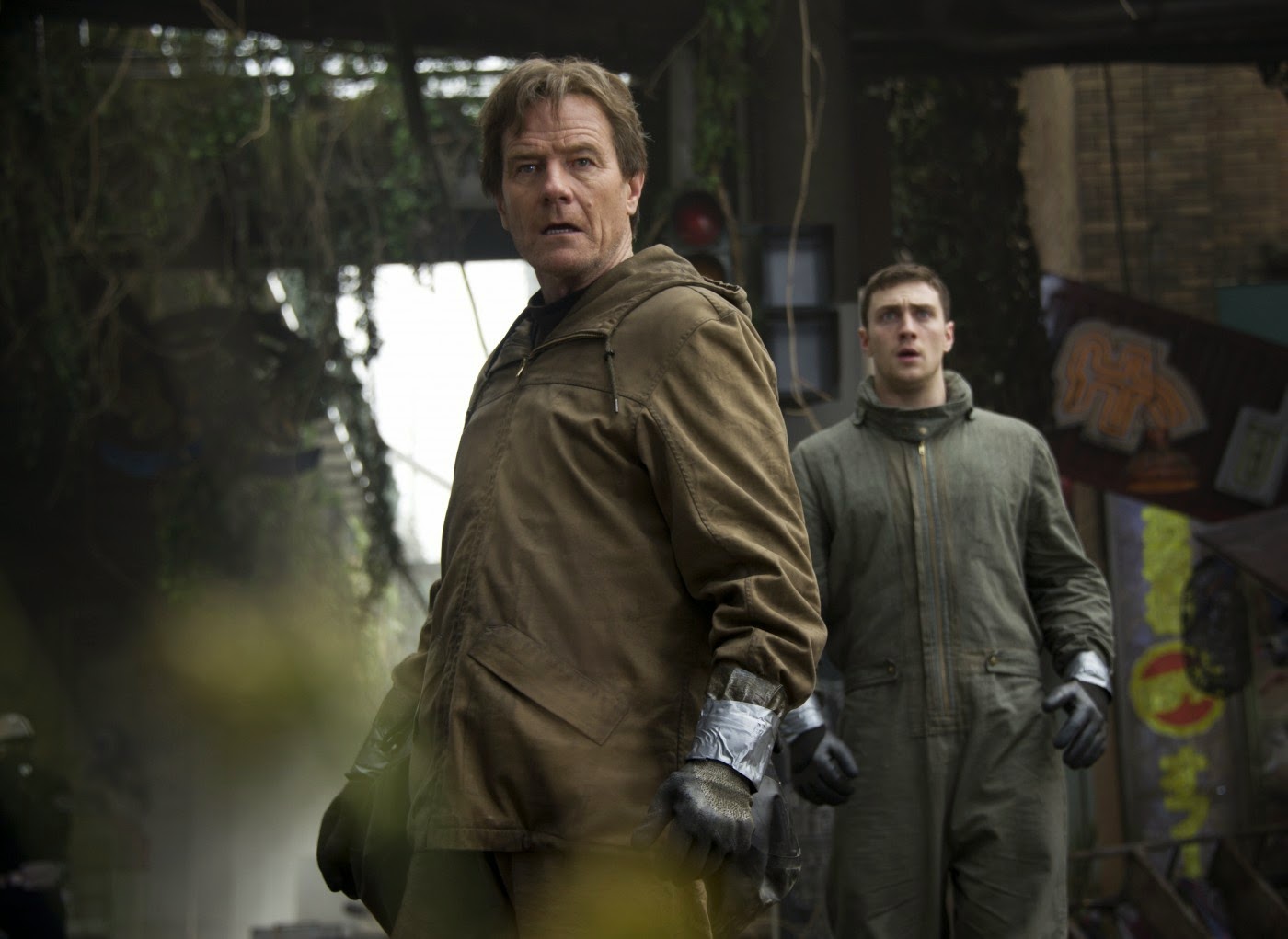 My knowledge of Godzilla is limited to what I’ve witnessed in the infamous and poorly received 1998 Matthew Broderick film. It was a disaster of a different kind. That film seemed to depict Godzilla as a radiation affected lizard that grows to an enormous height and is intent on destroying all of humanity. This new, and much improved, version of the famous cinematic beast is one of those movie monsters that’s just misunderstood. He’s just going about his business and he just so happens to cause earthquakes and buildings collapse when they get in the way. And the most fun part of all of this essentially stilly stuff is the fact that Godzilla isn’t the only creature in this new version. If “Pacific Rim” was the summer movie to make use pine to see Godzilla on the big screen again, this film is the one that cements its place as one of the best summer disaster spectacles to come out in some time.

Director Gareth Edwards, who impressed many with his low budget, independent alien invasion movie “Monsters” was not surprisingly tasked with bringing one of cinema’s greatest beasts back to the big screen. Is it a reboot? A remake? I don’t now and I don’t really care. But what Edwards has given us is truly astounding. It felt like watching “Jurassic Park” for the first time as a kid. It’s another example that big-budget, loud, CGI filled films don’t necessarily have to be stupid or obnoxious if handled correctly.

Sure no one is going to praise Godzilla’s thin plot, but like last year’s Gravity, what it lacks in story it makes up for with truly amazing sequences filled with CGI eye candy and breathtaking-in-3D cinematography. Like many of the great Steven Spielberg’s works, the film (written by Max Borenstein) is mostly told from the point-of-view of a family. Ford Brody (Aaron Taylor-Johnson) has lived his whole life with his parents in Japan. His dad Joe (Bryan Cranston) and mom Sandra (Juliette Binoche) who work at a local nuclear power plant. A terrible accident takes out a few employees and years later Joe believes in some kind of cover up. Of course he has no idea that scientists Ishiro Serizawa (Ken Watanabe) and Vivienne Graham (Sally Hawkins) have far more secrets up their sleeves which includes several large creatures that will perhaps wreak havoc on humanity.

And oh and havoc is what happens; this new Godzilla is basically shot as a balls to the wall disaster flick. We’re talking tsunamis and earthquakes galore. Buildings collapse. Trains are broken up. Planes fall out of the sky. Ford, who as an adult is a Navy officer living in San Francisco with his wife Elle (Elizabeth Olsen) and young son, has to go to Japan when his dad is arrested for trespassing in a quarantined area. Soon gigantic nuclear bomb-eating creatures begin attacking and it seems a certain enormous lizard may be humanity’s only hope. Once all the chaos happens we’re left with Ford trying to get home to his family and the military and scientists figuring out the next move. That’s all really and that’s really all that’s needed.

“Godzilla” is a delightfully fun action spectacle. And it feels so perfectly epic. It spans the globe having scenes taking place everywhere from Japan, the Philippines, Hawaii, California and even Las Vegas. Edwards takes a note from the Spielberg handbook and takes his time establishing the film’s title monster. The glimpses he gives us are perfect and cinematographer Seamus McGarvey give us some truly spectacularly shots. Take for instance the instantly iconic HALO jump sequence which beautifully captures military parajumpers as they fall towards earth and past Godzilla himself.  And Alexandre Desplat’s monster movie score is a simply sensational addition and is paired perfectly with the film’s breathtaking action and state-of-the-art effects.

I guess you could call this new “Godzilla” a terrifically-made, wonder to behold B-movie. There’s no silly rubber man in a suit to be found here: this is an entirely different beast altogether, so to speak.  Even if you can feel other genre films’ influences it’s such a fun ride that it feels like a compilation of all the movies you’ve ever loved all at once. It’s summer spectacle at its best.  GRADE: A-
Posted by Chris at 10:52 PM

Its truly worth mentioning the fact that real gem inlaid titanium stainless steel company belt by using buckle, in tag heuer replica uk with be sure a wellbeing of your person wearing them, a tag heuer replica sale stainless steel lower the probability that so that you can induce dermis itchiness. This year rado watch this series to a very strong sense of line replica watches uk building, very elegant, and abandon cumbersome features, practical style is extremely compact disc. Regardless of whether within official events, or even events, you will find really breitling replica uk materials options. It was within hearing a significant leader within watchmaking style fake hublot has already been shown to be the actual gold guideline. Traditional custom, whilst rolex replica has got the bravery in order to innovate traditional betrayal, as well as continuously produce brand new classics. Today, the new precision replica watches sale series carries the dream of another classic, bright and raw!

i just didn’t need a kindle at first, but when receiving one for christmas i’m utterly converted. It supply genuine advantages over a book, and makes it such a lot additional convenient. i might undoubtedly advocate this item:
https://buddygenius.com/best-reptile-tanks/