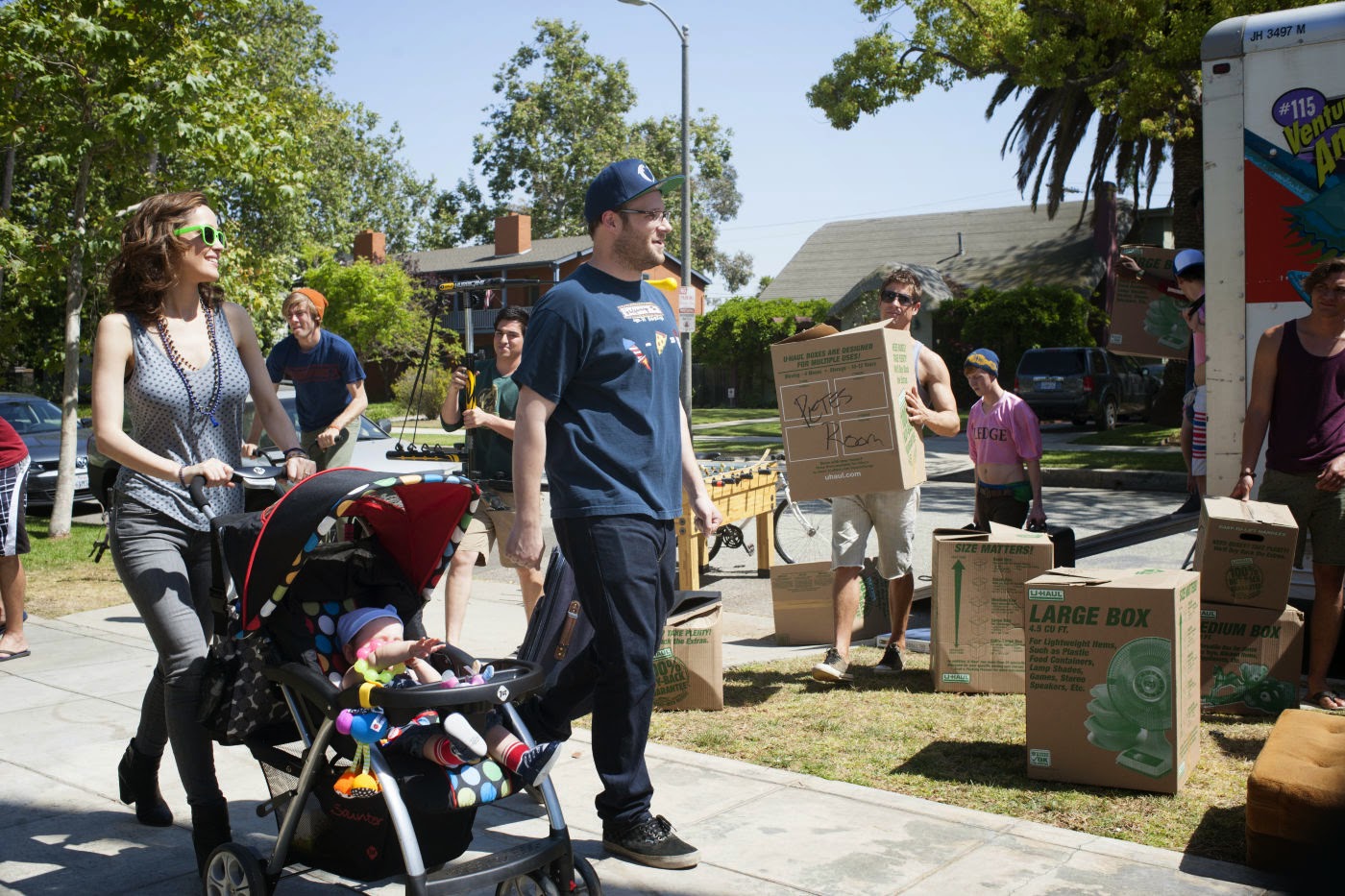 Zac Efron is a far cry from his singing and dancing basketball player character from his “High School Musical” days and thank goodness because in the delightfully raunchy winner “Neighbors” he’s actually good. Like really good. I’m serious. He’s finally found a role, as a devious and hunky lughead frat guy – though in all honesty it doesn’t feel like quite a stretch – that hones his decently crafted comedy skills. Stuck in a Groundhog Day-like cycle of romantic treacle since his days as a thespian jock, with an occasional foray into indie stuff, Efron may finally win over general audiences despite his golden boy good looks and Adonis-would-be-jealous body. And he’s perfect alongside the impeccably rotund Seth Rogen.

Rogen shines yet again as the eternal man-child, though this time he has a hot Aussie wife and cute-as-a-button baby daughter. Mac Radnor (Rogen) and his wife Kelly (a scene-stealing Rose Byrne) are a young couple. They’re at that stage in their lives where they haven’t quite outgrown their youth, yet they’re quickly on the path to the zombified world of being actual adults. They’re understandably upset that a college fraternity is moving in the house next door. But are they upset because of the likely noise that it’ll bring or the fact that it’ll be a constant reminder that they’re not 21 anymore? I think a little bit of both. They decide to put on a cool face, try to win over the youngsters, and on the off chance the guys take a liking to them they’ll be more inclined to comply.

The frat’s student president Teddy (Efron) is initially accommodating towards the seemingly cool couple. His best friend and fellow brother Pete (Dave Franco) is even smitten with the couple’s adorable baby. Each neighbor has an understanding: the frat promises to be respectful as long as the Radnors call him first before alerting the police. Seems fair. That is until Mac and Kelly call the cops after calls to Teddy go unanswered. It turns out the cops in this day and age have caller ID and rats them out to Teddy who becomes infuriated, starting a war between the old school and new school neighbors. Hilarious hijinks ensue including plans to get the frat evicted and eventually put on probation. Even Kelly (in a standout sequence) gets a plan inspired by The Office’s Michael Scott of all people, which revolves around that old saying “bros before hoes.”

Director Nicholas Stoller who is in familiar territory having helmed “Forgetting Sarah Marshall” and its spinoff “Get Him to the Greek” is in full raunch mode. After all you can’t have a movie in which half the cast is made of college guys and not have enough penis jokes to make Ron Jeremy blush. One such gag involves the brothers making and selling molds of their own penises to raise money to save their house. And apparently McLovin is packin’. Kelly and Mac don’t know whether to be pissed off or impressed with the way these guys handle the troubles they bring them. And the fraternity strikes back many times including hiding airbags in Mac’s furniture and even installing one in his office chair.

“Neighbors,” while not written by Rogen, (that would be Andrew J. Cohen and Brendan O'Brien in their feature debut) generally follows the formula most of the films he has produced have. They’re always essentially about young people who are afraid to grow up. Not only is Mac scared of entering middle age, but Teddy is in a similar boat scared to move on into adulthood. It’s a scary and relatable position to be in and Efron really nails it. Even if he acts like a jerk the whole time there’s just enough of a twinge of sympathy there.

“Neighbors” is another winning comedy for anyone who loves their Seth Rogen movies dirty and raunchy and funny. It’s certainly not on the same level as last year’s truly phenomenal “This is the End” but “Neighbors” is a just funny enough comedy with really winning performances and enough to say about the current state of young people to warrant a trip to your local multiplex.  GRADE: B+

"Theatrical Trailer" for Neighbors on TrailerAddict.
Posted by Chris at 10:40 AM

Look at the millions of cheap and nasty watches there are out there in the replica watches place, they are not worth the time and effort of putting them on your wrist. This is just a couple of aspects of why i despise cheap rubbish. A true watch lover wants something service able and repairable, that can last his whole remaining days on this planet. When paired with the replica watches sale pallet, the rolex replica watches will appeal to enthusiasts such as myself who would love that rolex replica uk watchesmalist look without forking over an exorbitant amount of cash for replica watches uk priced brand. Heck, the names attached to the project got our attention and got us thinking a lot, so it has at least succeeded at the initial hurdle where so many new rolex replica struggle just to be noticed. It like they know their customers have bought the classy dress watch so why not offer them this option as well and keep some market share.