Revenge of the Nerds: The Hilarious “Big Hero 6” Flies Animation and Super Heroes to New Heights 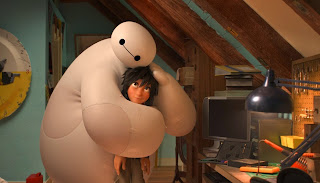 Super hero films have become so over-saturated in the movie marketplace it’s almost borderline annoying. At least most of them that come out are actually good. It’s just becoming sort of difficult to tell them all apart. They even come out in animated form as evidenced by Disney’s new action-comedy “Big Hero 6.”It’s sort of refreshing that Walt Disney Animation Studios have been diversifying their animated films as of late and it’s worked wonders for them. They can go back and forth from making princess movies to action comedies and haven’t taken a misstep since before “Tangled.” Hot off the success of the phenomenon “Frozen,” Disney gives us a something completely different yet just as fun, fresh, and beautifully animated. Sure there aren’t any musical numbers or magic, but they do deliver one of the most delightful Disney characters since Dory in “Finding Nemo.”

“Big Hero 6” takes place in a fictional amalgamation of San Francisco and Tokyo appropriately called San Fransokyo. Our young hero is appropriate named Hiro (Ryan Potter) who is a some sort of robotics genius 14 year-old who takes part in back alley robotics fights. He’s urged by his older brother Tadashi (Daniel Henney) to apply to the robotics program at his college. He invents these amazing microbots that he can control and morph into various objects and shapes with his mind, which obviously attracts lots of attention, but before you can say “every Disney movie needs a tragic family death” something traumatic happens in which the only thing left behind is a lovable, medical robot named Baymax  (Scott Adsit) made by Tadashi. Baymax, who senses that Hiro is hurting emotionally is activated and becomes his personal healthcare companion. Baymax is simply one of the most amazing animated characters in quite some time. Together, Baymax and Hiro form a typical bond found in movies like this (think “E.T.” or “How toTrain Your Dragon”) and eventually happen upon something quite sinister lurking in San Fransokyo.

The film is actually based on a little known Marvel comic book series. Having little knowledge of the comic, it can be said that the film at least is quite a success. The rich characterizations are quite something. Hiro doesn’t just feel like any kid who has experienced loss. And the bond between him and Baymax is simply a pleasure to watch. It’s funny and everything about these two feel genuine. Nothing here feels forced. Eventually Hiro and Baymax form a super hero team with his nerdy college-aged friends who are all super geniuses too. The group is diverse and every character feels memorable and is given something to do and there’s even a memorable villain on top of everything else. Don Hall and Christ Williams have taken an almost worn out genre and crafted a really great film that could easily become its own franchise with plenty of good characters to go around.

“Big Hero 6” is a delightful family film. It’s a complete 180 from last year’s “Frozen,” but it’s every bit as good. It’s certainly more in the vein of “Wreck-It Ralph” or “The Incredibles” but it may be even better than those. The animation is really amazing (the microbot sequences in particular), Henry Jackson’s score is as exciting as the action and the humor in Robert L. Baird, Dan Gerson, and Jordon Roberts’ script works really well. The entire concept of Baymax is really outstanding, from his physical design (he’s described as a gigantic marshmallow at one point which feels accurate) to the terrific voice work. I was really blown away by this really funny, moving, and exciting animated film. It was a blast. GRADE: A-