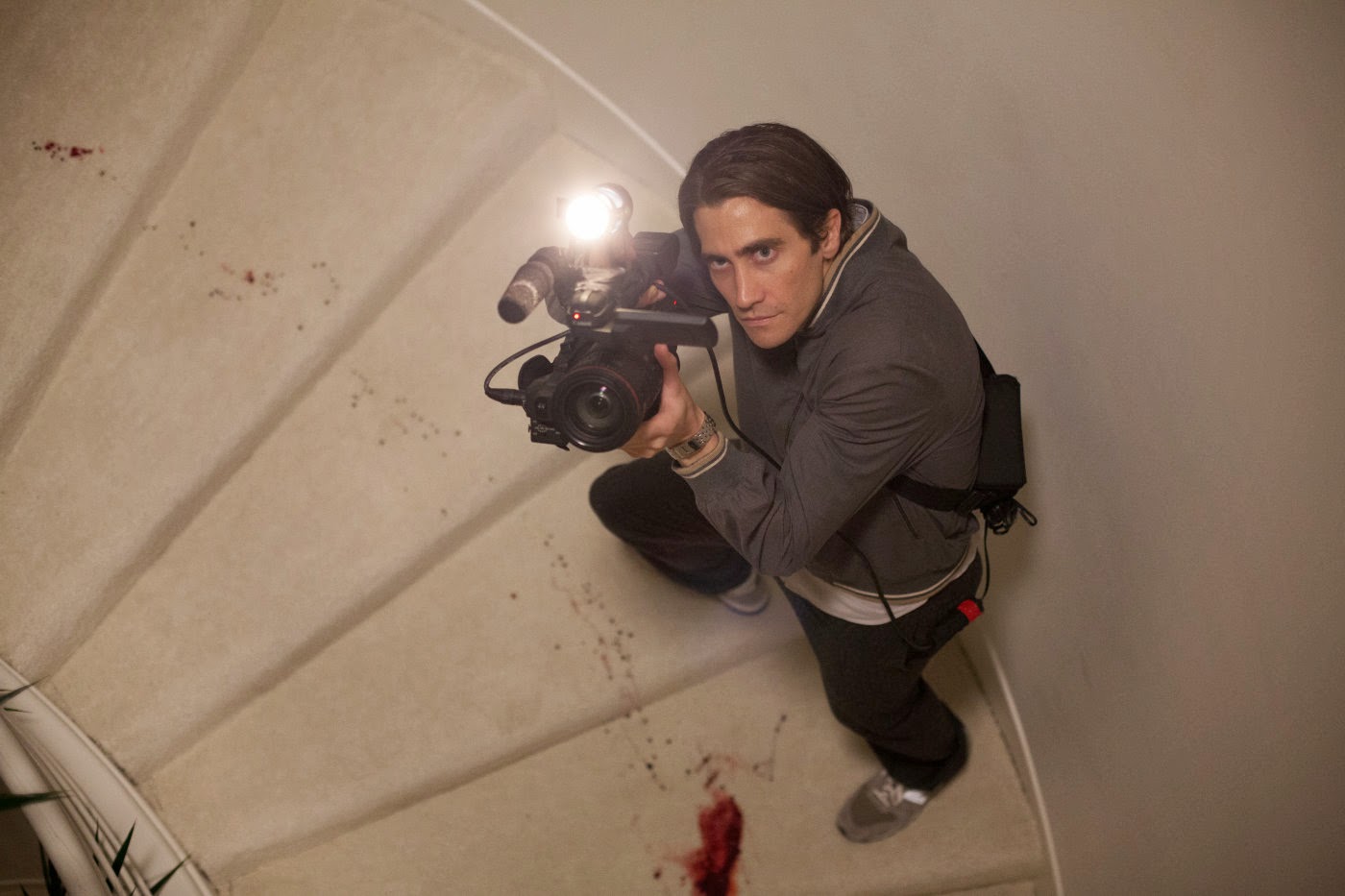 Where the heck did Jake Gyllenhaal go? He looks all gaunt and squirrely, almost as if he’s wasting away, in his latest crime thriller “Nightcrawler.” It’s a scathing media satire and crackling crime thriller from first time feature director Dan Gilroy. The actor with his black slicked back hair and stark dark eyes almost fades into the background of the creepily shot scenes of wee hours Los Angeles where he begins as an amateur cameraman trying to get footage of accidents and crimes moments after they occurred so he can get paid by a local news channel who is struggling in the ratings. Gyllenhaal has given one outstanding performance after the next in challenging material be it “Prisoners” or “Enemy” and here he has found his Travis Bickle role with a performance that is sure to be remembered for years to come.

Any questions of whether Gyllenhaal is playing an immoral character is vanquished in the film’s first few moments when he assaults a security guard and is later seen wearing the guy’s fancy wristwatch. He’s a scavenger. Gyllenhaal is Louis Bloom who begins the film turning in scrap metal for cash. But then he witnesses amateur camera guys filming a car crash aftermath and decides to try it out for himself. In the film’s first half we witness the trials and tribulations of Lou becoming a “nightcrawler” - those pesky camera guys who are always shoving their lenses in the faces of innocent victims of crimes or accidents and freelancing the footage for local news stations. And then Lou almost perfects it.

Lou sells his increasingly graphic footage to a local producer Nina (Rene Russo channeling her inner Faye Dunaway) whose morning news show is the lowest rated in the city. Both Nina and Lou seem to bond over this creepy footage and Lou especially becomes obsessed with pleasing Nina’s outrageous quest for high ratings and his increasing need for more money. Of course he goes about it in the craziest ways possible whether that means moving a body to get the perfect shot or withholding photographic evident from the police to further his career. You can only feel bad for Lou’s naïve apprentice Rick (Riz Ahmed) who he hires as his “intern.” This is a film that forces us to follow along with a morally empty character who makes increasingly unethical decisions. And the film’s suspense is shoved into overdrive in the film’s last act when Lou makes some of the boldest and insane decisions imaginable.

“Nightcrawler” works like a modern suspense thriller version of “Network” much of if functioning as if were Michael Mann’s post-“Collateral” crime actioner. Cinematographer Robert Elswit shots the film as if it were a dirty, urban 70s noir. He captures the crime riddled LA nightscape with breezy intensity.  The movie, shot on actual film, captures the grainy cityscape perfectly, including an incredibly intense car chase that pits the viewer in the middle of the action. James Newton Howard’s electronic, almost rock-like score feels as strange as the film itself and works perfectly. Like Gyllenhaal’s character it’s odd but charming. In fact, Gyllenhaal’s scraggly, amoral but cordial (and arguably insane) character could be an evil distant cousin of his similarly rogue and heroic cop character from “Prisoners.” Both men are wholly solitary and strange individuals with completely different motivations.

“Nightcrawler” is compellingly watchable and that’s because Gilroy’s script and direction are top notch. Facing double duty, this guy makes the right decision at every possible time, resulting in a perfectly paced thriller with appropriately suspenseful sequences, impeccably shot and timed action, and a captivating morally bankrupt character at the center. It’s impossible to take your eyes off of him. The idea of satirizing the news media is not even remotely a new thing, but this film makes for one fascinating experience and is as relevant as ever.  GRADE: A

Trailer for Nightcrawler on TrailerAddict.

There is quite a bit of buy replica watches coverage out there on vintage watches. Google is your best friend if you’re just starting out. Sometimes Breitling replica you will find relatively small websites that specialize in just replica breitling watch one brand or even one model, and these can be gems.