Hey Arnold! Too Convoluted For Its Own Good, “Terminator Genisys” is Still Nostalgic Fun 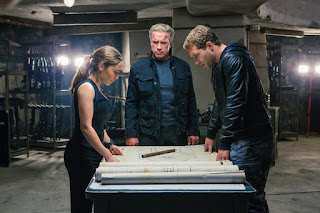 I've always had a theory that movie sequels that come out years after the previous entry rarely work. I was proven wrong with the recent release of the thrillingly fun “Jurassic World.” Now we have another beloved franchise with another entry (the fifth one if you're keeping track) called “Terminator Genisys.” Odd titled spelling aside, the film is decently fun and it returns Arnold Schwarzenegger to one of his most famous roles, but the film's confusing time travel plot line becomes more head-scratching than truly thrilling.

First of all, let's address the elephant in the room. It must be said right away that “Terminator Genisys” has a problem before the movie even begins, and it's no real fault of the film or filmmakers: its trailer reveals a plot element that should have never been revealed. You know about it it, as did I. It doesn't really hurt the movie, but takes away what would have been a fun surprise. Having said that the revelation is interesting to say the least and the less said about it to people who haven't seen the film the better.

There's nothing truly wrong with this fifth entry. Director Alan Taylor (Thor: The Dark World) is completely capable of delivering fun action scenes, even if none of them are truly as memorable as what James Camera gave us decades ago. Even the actors are pretty good. Jai Courtney, mostly known as playing Bruce Willis' son in the dreadful fifth Die Hard film, gives one of his better performances as Kyle Reese the man who is sent back in time to protect Sarah Conner (played this time by Game of Thrones' Emilia Clarke) who will eventually give birth to John who will become a leader in the futuristic war of man vs machines. Clarke makes a good Sarah Connor though she's no Linda Hamilton. Jason Clarke (last seen in “Dawn of the Planet of the Apes”) is the adult John who sends Kyle back in time. Anyone who knows this franchise well will either love the film's fun attempt to retroactively change the earlier entries' chronology, or completely hate it: It turns out, a good version of the T-800 (Schwarzenegger) was sent to Sarah's childhood and has been protecting her… so when the T-800 from the first film shows up in 1984, there is an Arnold vs Arnold fight every sci-fi nerd has been waiting for. Though it's over much too quickly.

One can't even describe the full plot of “Genisys” without getting a headache so it's pointless to attempt to tell it here. Screenwriters Laeta Kalogridis and Patrick Lussier spend most the script changing everything about the first few films. There's also way more time travel than any of the other films (though it is pretty cool to see how it all works) which creates too many complex story elements that are way too difficult to keep track of. A time travel film can only be successful if it's done in a relatively simple way and if it makes the story pretty airtight. There's nothing all that airtight in “Genisys” and I stopped trying to figure it all out by the halfway point. And I still don't understand the point of recent Oscar winner J.K. Simmon's character. And I don’t think the film knows either.

“Terminator Genisys” will easily be one of those divisive entries. Some fans of the series will enjoy it and others with loathe it. Put me somewhere in the middle. It has plenty of positives including the return of Arnold, a fun take on elements from the earlier films, and a sense that the filmmakers had fans in mind. At this point in the series I'm not sure what other direction the film could have taken (and it's much better than “Salvation”) but I'm convinced nothing will ever top Cameron's films.  GRADE: B-

Trailer for Terminator: Genisys on TrailerAddict.