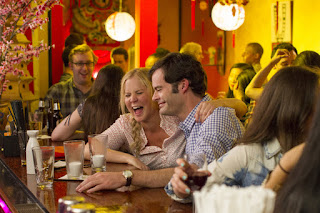 Put simply, “Trainwreck” is sort of a raunchy Woody Allen film for the millennial generation. It’s sort of ode to New York City (a rarity for director Judd Apatow whose previous films take place in LA) and follows a woman who can’t quite seem to get her life together, though she’s perfectly okay with it. It has many of the trademark Apatowisms like funny supporting players, scenes that go on way too long, and yet strangely enough no appearances by Apatow regulars like Seth Rogen or Paul Rudd, which actually feels refreshing. Instead we get a perfect breakout role for comedian Amy Schumer who also wrote the script. As someone who has never bared witness to anything Ms. Schumer has contributed to the world until this, I can honestly say she does a darned fine job at both acting and writing. I wouldn’t be surprised if she even received award recognition here (at the very least a Golden Globe nod).  “Trainwreck” works because it takes everything we know or expect about romantic comedies and just goes for the jugular. It’s way more insightful and character driven than most of its ilk and while it doesn’t necessarily do anything particularly original cinematically the film works on several levels.

I can’t say how fresh it feels to see a film directed by Judd Apatow that wasn’t also written by him. Having a female voice changes things up dramatically but still having that raunchy male eye behind the camera is a perfect combo – especially since Amy Schumer can get be just as dirty as her male counterparts. Schumer plays Amy Townsend who lives a free-spirited lifestyle. She a writer for a sleazy men’s magazine, she sleeps around, drinks a lot, and doesn’t want any kind of meaningful relationship. She’s close with her similarly free-spirited and divorced father who has recently been brought to a nursing home. Her sister Kim (Brie Larson) is a perfect foil for Amy: she’s settled down with a husband and her lame stepson who the film likes to make the butt of the joke. The film basically tells two stories: the story of Amy and her sister and their differing points of view on life and that of Amy and sports medicine doctor Aaron Chambers (Bill Hader) who she must write an article about and ends up falling for.

The film is peppered with memorable side characters and cameos that accompany Amy and Aaron’s romantic journey. Aaron works with several high profile sports celebrities and is best friends with LeBron James who appears as himself. Hader’s scenes with James are sometimes funny but sometimes go on too long. His presence (and Aaron’s career in sports medicine in general) feels like a way to just get guys to see the film but it’s sort of a different approach to the material and otherwise welcomed. LeBron James isn’t the worst athlete-turned-actor, but he definitely shouldn’t quite his day job. He’s certainly not as bad as WWE wrestler John Cena who appears in an extended cameo as a guy Amy is dating early in the film who unwittingly makes homoerotic jokes at his own expense. Tilda Swinton is particularly memorable as Amy’s tense boss who says mostly inappropriate things. SNL’s Vanessa Bayer has a decent role as Amy’s co-worker and wrings some decent laughs despite her unfortunately mitigated screen time.

Schumer’s script her performance is what really stand out here. It goes from raunchy comedy to sentimental drama sometimes within the same scenes and Apatow’s assured direction makes sure the transitions are seamless. It also works as an ode to the endless array of New York set romance films that the film even squeezes in a Woody-approved (save for the funny joke made at his expense) “Manhattan” like montage complete with ‘Rhapsody in Blue’ jazzing up the soundtrack. Sure the film probably meanders in parts and is probably 10 or 15 minutes too long (it sort of feels like a DVD’s unnecessarily longer director’s cut). However, the film features extremely sharp and observant humor, some of which will probably be dated in a few years’ time, but it’s such a charmingly vulgar and refreshing reflection of our present day that you’re likely to identify with the characters and thoroughly enjoy it. For sidesplitting laughs with a well-earned emotional core, and easily the funniest Judd Apatow directed film since "Knocked Up," you could do a lot worse than “Trainwreck,” just leave the kids at home.  GRADE: A-

Trailer for Trainwreck on TrailerAddict.
Posted by Chris at 8:21 PM

This article is interesting and useful. And let me share an article about health which insha Allah will be very useful if we use it again for others.