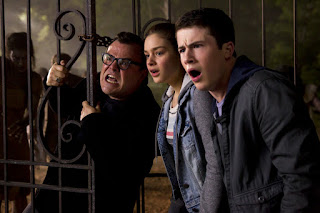 You wouldn't necessarily look at the filmmakers' credentials for “Goosebumps” an expect anything truly amazing. If you look up the writer and the director you'll see titles like “Jack the Giant Slayer” and “Gulliver's Travels.” It's almost groan inducing until you realize the guys who wrote the film's story are the same duo who brought us “Ed Wood.” It's too bad “Goosebumps” couldn't also be a full-fledged Tim Burton film but it's close enough. It also wisely heeds closely to the formula established by 90s kids movies “Jumanji” and “Hocus Pocus.” It's a perfect mix of comedy and kid-friendly frights. Heck, it's almost as flat-out enjoyable as “Gremlins.” This is a movie Chris Columbus would have had his hands on if they decided to make a “Goosebumps” film during the books' heyday. And while we're in a comparison mode, as strange as it sounds, “Goosebumps” might even be the “Wes Craven's New Nightmare” of children's books-turned-family horror comedies.

How does one adapt a popular series of children's horror novellas to the big screen twenty years after hitting bookstores? In this day and age you take the meta route and have one of the main characters be author himself R.L. Stine. Comedy guy Jack Black takes on the role (though Stine does make a brief cameo). He plays Stine as a reclusive weirdo who's very protective of his teen daughter Hannah (Odeya Rush). A new family moves in next door. There's single mom Gale (Amy Ryan) and her teenage son Zach (Dylan Minnette). As if moving to a new town is bad enough for Zach, his mom is his new school's vice-principle. He catches the interest of Hannah next door and her weirdo father who insists Zach stays away from her and his house. Eventually it's revealed that this guy is actually author R.L. Stine who has all his Goosebumps manuscripts locked away because the monsters inside them are in fact real. And then they get unleashed and wreck havoc on the entire town mostly because of evil dummy Slappy (also voiced by Black) who orchestrates the mayhem.

It's sort of a big risk for a studio film to write its author into the script but Darren Lemke's screenplay is surprisingly sharp, kooky, and twisted. Director Rob Letterman deftly balances humor and frights astonishingly well. There's nothing here that will frighten anyone over 13 but I'm sure little kids will get the willies. There's enough humor in the form of Zach's bucktoothed sidekick pal Champ (Ryan Lee) and Aunt Lorraine (Jillian Bell) to make kids laugh as much as turn away from the screen. There's nothing here particularly grotesque or mean-spirited. The visual effects are sufficient and the animators have obviously had fun bringing all of the creatures to digital life. Most importantly the movie is just plain fun, with a great Danny Elfman score.


“Goosebumps” is a fun and wild ride. I assume the more you're familiar with the books series the more you'll get out of it, but anyone with a hankering of some 80s or 90s family fun nostalgia don't have to look much further. It's a delightfully creepy romp that's much better than it had any right to be; in other words, it's thankfully just as fun for adults as it is for the kids. It won't necessarily cause goosebumps, but it certainly won't produce yawns.  GRADE: B+

Trailer for Goosebumps on TrailerAddict.
Posted by Chris at 5:21 PM