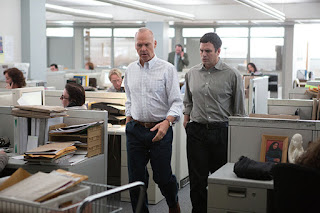 It's not surprising that films directed by actors usually feature truly great performances. “Spotlight” is no exception. Tom McCarthy, who previously directed indie films like “Win Win” and “The Visitor,” hits it big with “Spotlight.” It tells the true story about a team of writers at the Boston Globe who uncovered the massive child molestation scandal that rocked the Catholic church. McCarthy has appears on screen in films ranging from Hollywood fluff like “2012” and comedies like “Meet the Parents.” He's arguably stronger behind the camera as he directs his actors who give fantastic performances.

“Spotlight” is one of those “true story” films that sort of works like a documentary (though isn't at all shot like one) in that it sort of drops you in front of characters and slowly unravel a story that becomes more and more fascinating as time progresses. We're introduced to various newspaper reporters at the Boston Globe who make up the investigative Spotlight team. There's Michael Keaton's Robby, Rachel McAdams' Sacha, Mark Ruffalo's Mike, and Brian d'Arcy James' Matt. The new boss at the paper is Marty (Liev Schreiber) who wants the Spotlight team to investigate some reports of local priests who have been accused to molesting local children in the past. Some reports had been published years earlier but nothing really came of it. But the team is about to uncover the disturbing truth and blow the lid off one of the biggest cover ups of our time.

McCarthy lets the story and his actors do most of the hard work. He isn't interested in fancy camerawork or fancy editing. Not to say there aren't some great shots here. As the Spotlight team is out and about interviewing witnesses and victims there are many shots of large churches looming in the background. These beautiful buildings are actually hiding the ugly truth. The victims' testimonials are discussed in many disturbing details; many of them now fully grown up, as it turns out these crimes have been committed for decades and decades. It's not news to us as viewers (the film takes places back in 2001) but we're fascinated to discover the details as much as the characters are determined to uncover the fully truth even if they don't really know how deep this whole thing goes.

“Spotlight” is certainly destined for awards success. There is always room for the true life social justice drama. Films like Erin Brockovich, All the President's Men, Silkwood, and The Insider etc are all films that told similar stories. “Spotlight” is a really-well made docudrama that features great performances and an extremely strong screenplay (written by McCarthy and Josh Singer). The acting ensemble is great and the story becomes more and more engrossing as it progresses. Watching the ins and outs of newspaper journalism (which is going the way of the dinosaur) is really interesting to see. The film also tells an important story without ever being preachy, exploitative, or treacly; it deserves all the accolades that are sure to come its way.  GRADE: B+

Trailer for Spotlight on TrailerAddict.
Posted by Chris at 5:05 PM