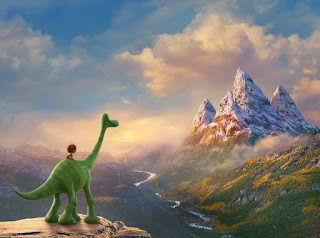 The the biggest flaw of Pixar's “The Good Dinosaur” is its release date: it arrived in theaters less than five months after “Inside Out” which is arguably one of Pixar's most accomplished and original films. And because “Inside Out” is so great, people's expectations for the next great Pixar film is unbelievably high. Having said that “The Good Dinosaur” is tremendously entertaining and emotionally charged film with stunning animation, funny characters, and a simple but involving story. It's certainly more of a traditional tale, but it's a fun adventure that is certainly to please anyone who enjoys a good family film in the vein of “Homeward Bound,” “The Land Before Time,” or the all-time classic “The Lion King.”

“The Good Dinosaur” begins with the interesting premise of Earth not being hit by the meteor that caused the dinosaurs to become extinct, which lets humans and dinosaurs evolve to share the planet. While nothing truly original is done with this concept it just allows humans and dinosaurs to co-exist. We're introduced to the shy, and always-afraid Arlo and his family. In true Disney form Arlo is “different” from the rest of his family and longs to feel wanted and needed and “make his mark” on the family farm. And since this is a film released by Disney, it's not long before Alro finds himself with less family members than when he was born and off on his own after a storm washes him away from his home. Lost and afraid he must make the journey back home.

To be perfectly honest: is the film perfect? Not by any means. This doesn't quote capture the magic of most of the other top tier Pixar films and story-wise it pretty much hits all the standard beats. But it's completely engaging and I found myself identifying so strongly with Arlo and his journey to reunite with his family that I got more way choked up than was probably necessary. The motion arrives as Arlo's “enemy” a small, dog-like human boy quickly becomes his best friend. The two bond over similar loses in their lives and become dependent on each other for survival in the wild. There's not clear cut villain here, it's mostly Mother Nature that seems to be the biggest threat though other dinosaur species make Arlo's journey more difficult including some nasty flying dinosaurs and a few raptors that are depicted as hick trailer trash. It's the t-rexes who actually turn out to be quite friendly.

“The Good Dinosaur” had suffered from production problems (the film was originally slated for release last year in 2014 but got pushed back) and you can tell. The story is a bit inconsistent, characters come and go and the film is rather episodic (like most road trip movies tend to be) so you can't help but feel that the film suffers from perhaps too many cooks in the kitchen. If this was a film released by any other studio it would certainly make no difference. You'd never really assume this was a Pixar film if you didn't know that going in; however, it's still quite fun and enjoyable for what is is. Why does ever Pixar film have to be so original and high-concept anyways?

Anyone who is a fan of good animated films will certainly find something to enjoy about “The Good Dinosaur.” It may not be Pixar's best but it's far from their worst. It's a pretty standard story but it has richly defined main characters features an emotionally engaging story about loss and the importance of home. And like any other Pixar movie, bring some tissues.  GRADE: B+

Feature Trailer for The Good Dinosaur on TrailerAddict.
Posted by Chris at 2:08 PM