Olympus Has Fallen: “My Big Fat Greek Wedding 2” is a Missed Opa!-tunity 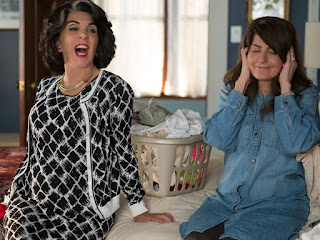 Ugh, more like “My Big Fat Greek Trainwreck.” Now the nostalgia reaper has come to claim the souls of middle-aged book clubbers who who could care less about brooding caped crusaders. Of course, one doesn't need to be 50-something to enjoy the irresistible charm of the cloying but lovable Portokalos family introduced fourteen years ago in the indie (but Tom Hanks-backed) big fat smash hit “My Big Fat Big Greek Wedding.” I, like many American moviegoers, fell in love with it. It certainly wasn't the most original movie to ever come along but somehow it's innocence and honesty and wittiness in portraying a woman's struggle to find herself in a sea of her gigantic clingy ethnic family was universally relateable. Even if you weren't specifically Greek you easily saw yourself surrounded by your equally gigantic clingy family whether it be Jewish, Italian or [insert other borderline stereotypical ethnicity here]. It was harmless fun.

Harmless fun is what I'm sure screenwriter/actress Nia Vardalos had in mind with the long-awaited (for some I guess?) sequel unimaginatively titled “My Big Fat Greek Wedding 2.” Fortunately, the entire cast returns. Like everyone, really. Unfortunately, Vardalos, even in fourteen years doesn't quite manage for anything all that interesting for these people to do. And even if they were sort of ethnically stereotypical the firs time, they've been upgraded to practically Looney Tunes characters. Not to mention that many of them haven't quite aged very well. I'm no fitness expert but many of them certainly have the fat part down.

The film picks up fourteen years after the last film and Toula (Vardalos) and Ian (John Corbett) are preparing for their teenage daughter Paris to select a college. Toula, even though she was the free-thinking black sheep who had her own Cinderella story the first time around has become just as clingy and annoying has her parents. Her marriage also seems to be on the rocks for reasons the script doesn't quite explain. More annoyingly is the film's central plotline which involves her parents Gus (Michael Constantine) and Maria (Lainie Kazan) not actually being married because the priest never signed their marriage certificate.

I appreciate Vardalos giving the elder actors meaty roles in a day and age when everything must be young and flashy and of a certain marketable demographic but both actors seem to have seen better days and don't quite have the same comedic timing they had the first time around. The rest of the actors you remember show up here as well with not all that much to do except mug for the camera. The first film's MVP Andrea Martin as Aunt Voula doesn't get as many funny lines even when she's discussing all her strange bodily aliments (As a side note, can we get a "My Cousin Vinny" spin-off in which Martin plays Mona Lisa Vito's mother, please?) Martin really tries to sell it. The bland sitcom-like direction from Kirk Jones certainly doesn't do her any favors. Even the film's technical merits feel lazy and uninspired.

It's obvious Vardalos really cherishes being Greek and wants to share her experiences with filmgoers. It's ripe material that was handled well the first time around. It's also abundantly clear that she favors progressiveness hence why her character arch from the first film was so memorable if predictable. She displays a little bit more of that ideology with the revelation of a certain male character who randomly comes out of the closet. It's a brief subplot (among others involving Alexander the Great and the dangers of bathtubs) but wouldn't the film be more interesting, unexpected, and fresh had the film revolved around this big fat Greek nuptial instead? The movie already relies on mildly offensive ethnic stereotypes, why not throw in some gay ones as well?

It's sort of obvious that, in the end, a sequel to “My Big Fat Greek Wedding” was not even a good idea in the first place. But geez this family is oh-so-lovable, for the most part. However, even the spin-off/sequel TV sitcom barely lasted seven episodes on CBS back in 2003. You don't remember it? Neither do I. The first film wasn't exactly a beacon of originality or quality cinema but it was magical, harmless fun. It made you feel happy. And like the greatest movie comedies, endlessly quotable. It's obvious here that you can't quite capture lightning in a bottle twice, even if it's big, fat, and Greek.  GRADE: C-

Trailer for My Big Fat Greek Wedding 2 on TrailerAddict.
Posted by Chris at 7:30 PM

This article is really fantastic and thanks for sharing the valuable post.
www.baixar-whatsapp.com.br