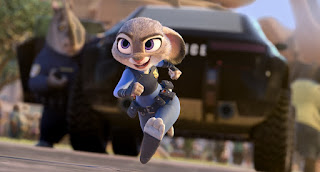 You have to hand it do Disney Animation Studios as of late. Some may decry they're far from their early 90s heyday but they have been making some terrific strides when it comes to animated films and have certainly given Pixar's crop a run for their money. You also have to admire their originality, they haven't even produced a sequel in years and not content on just making singing princess movies (though they're sometimes into that too). “Zootopia” is no exception; it's an exquisitely animated and fun buddy cop comedy with a surprisingly amount of emotional depth one may not necessarily expect from it's mostly silly marketing campaign.

The film's clever concept involves a world in which animals have evolved into modern society like humans. While walking and talking animals is certainly nothing new when it comes to Disney movies, the film's plot is certainly something we haven't seen before in animated form: buddy cop comedy. We're introduced to a bunny named Judy Hopps (Ginnifer Goodwin) who has always longed to be a police officer. Of course, those around her including her family always tend to laugh it off as tiny bunnies aren't known for being cops. Not content on being a carrot farmer Judy attends the police academy and eventually becomes the first bunny to become a cop in the big city known as Zootopia, a melting pot of various animal species living in harmony. On her first day she's met with plenty of skepticism and she's assigned meter maid duties. It's not long before she reluctantly teams up with a sly con artist fox named Nick (Jason Bateman) to uncover a stream of crimes involving local missing animals. To say much more, like most films, would ruin the fun.

Long story short, “Zootopia” is one of the more interesting surprises in quite some time. The film is refreshingly funny. The film's script does rely on witty animal “stereotypes” like sloths being slow so they obviously run the DMV. What's most surprising, besides how well the film succeeds on a pure entertainment level, is how much the movie has to say about society in general. The film isn't very subtle, with it's hints at prejudice and racism, but neither was George Orwell's animal allegory “Animal Farm.”

“Zootopia's” jovial mix of state-of-the-art animation, silly comedy, and social commentary is rather impressive. The characters are interesting, the writing is crisp and funny, and the film's noir-like mystery ranks it up there with the likes of “Who Framed Roger Rabbit.” That film also starred a bunny, coincidence?  GRADE: A-

Feature Trailer for Zootopia on TrailerAddict.