Mourn to Run: “Patriots Day” is a Gripping Docudrama about Boston’s Darkest Day 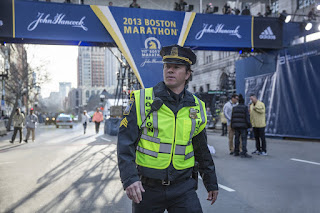 Terrorism in film today is a tricky thing. Long gone are the days of your “Die Hards” and “True Lies;” films based on actual terrorist attacks are even trickier. It took five years for Hollywood to make a film about the events of 9/11. Here we are not even four years after the Boston Marathon bombing and we already have a reenactment of the tragedy that befell one of the country’s most historical and unique cities. People can argue until their blue in the face about whether it’s “right” to make a movie about a national tragedy, but that’s been a staple of Hollywood filmmaking since its inception. Many will find “Patriots Day” extremely disturbing and difficult to watch. I’d argue that it’s not exactly everyone’s idea of “entertainment,” but as a cinematic document of the events as they occurred it’s intensely gripping, assured filmmaking. And even though the film is about a terrible tragedy there is an enormous sense of hope in its conclusion that a city and a nation can rebound from something so horrible to become even stronger.


I’m fortunate to not have known anyone directly affected by the Boston Marathon bombing but the events of that day still ring a little too close to home for me. My parents were at the Red Sox game that day and afterwards instead of watching the runners they decided to drive out of Boston and get lunch to avoid the crowds. Even my sister, who’s been a resident there for years, was in Europe at the time. Many families weren’t so lucky. While the tragedy could have been far worse in terms of fatalities it was still extremely horrifying and disturbing. And that’s all too apparent as “Patriots Day” disturbingly recounts the events of that day and the manhunt that followed.


The film stars Mark Wahlberg as Sgt. Tommy Saunders who was at the finish line during the bombings. Most of the film is centered around him though we get glimpses into the lives of some of the people who were there that day. There’s a young married couple played by Christopher O’Shea and Rachel Brosnahan who take that Monday off of work to watch the runners. There’s an MIT police officer (Jake Picking) who’s trying to woo a student. There’s a Chinese MIT student (Jimmy O. Yang) who’s just going about his daily business. And there’s two brothers (Alex Wolff and Themo Melikidze) who watch an online video about how to make a pressure cooker bomb. Eventually most of these characters’ paths will cross.


If you generally know much about the bombings and its aftermath including the unprecedented manhunt that followed you won’t really be surprised by the story here. However, director Peter Berg ramps up the suspense factor tremendously. The film already gives you an uneasy feeling as the camera floats above the city and when the marathon begins you know exactly what’s going to happen. It’s completely nerve-racking. Eventually two bombs go off during the race which causes major chaos and destruction and the film is shot with appropriately tough to watch glimpses of horror. You feel like you’re there.

As the situation goes from being a fun race day to a crime scene, we’re introduced to several law enforcement personal, including FBI Special Agent Richard DesLauriers (Kevin Bacon) who is quick to declare the bombings as terrorism after looking at some evidence. The film then becomes a procedural and it’s absolutely fascinating to watch them recreate the crime scene in a warehouse and eventually identify the bombers on surveillance cameras. The film then never lets up as the manhunt continues throughout the week leading to the entire city being completely shut down.


“Patriots Day” works on several levels; it’s an intense, well-made accurate reenactment of one America’s most tragic incidents but never feels overly exploitative. It’s also a fascinating police procedural that is just as gripping as any other Boston-set crime thriller. The film is filled with solid performances and a tight, realistic script. Berg really impressed me with “Lone Survivor” and he adds the same amount of realism and emotion this time around. The movie also refuses to become political by staying in the moment and offers an emotionally cleansing at the end by showing footage of the real life survivors. While much of “Patriots Day” is difficult to watch knowing how many people were affected in real life, it’s a tribute to Boston and a testament of hope, survival, courage, and heroism that left me hooked and utterly moved.  GRADE: A