Mind Over Matter: The Uneven “Split” Seems to Have an Identity Crisis of Its Own 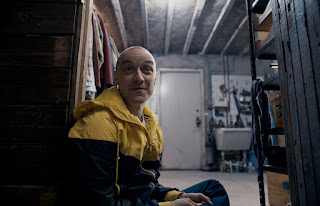 Oh what a winding and bumpy road it's been, huh, M. Night? I've been a big fan ever since he pulled the rug out from moviegoers back in 1999 with “The Sixth Sense.” Unfortunately, he's never found the same success since. “Unbreakable,” “Signs,” and “The Village” were all very fine films, flaws and all. After a misguided foray into special effects laden sci-fi fare, he returned to form for many with last year's “The Visit.” That “found footage” thriller certainly had it's moments but was still wildly flawed. And now we have “Split” which many are declaring to be his best work since he made a name for himself nearly twenty years ago. Unfortunately, “Split” fails to regain any of the thrilling spirit that permeated M. Night's early films, and while it features fine performances and some tense moments, like that train in “Unbreakable” it completely derails in its final act and features an unnecessary and gross backstory that taints the entire film.

It's important to look at the positives in any film, matter how terrible it is. This is how bad movies like “Suicide Squad” and “Passengers” can end up as Oscar nominees. The biggest positive of “Split” is easily the central performance from James McAvoy who plays “Dennis,” and half a dozen other characters, because Dennis has dissociative identity disorder. “Dennis” is really Kevin Wendell Crumb and has 23 various personalities living in his head. “Dennis” kidnaps three teenage girls and locks them up in his creepy basement. Two of them are best friends who are popular and the third is a social outcast named Casey (Anya Taylor-Joy). The girls quickly get that their kidnapper has multiple personalities and Casey being the “survivor” of the group uses it to try and help them escape. We see flashbacks to Casey's childhood and how she's a victim of her uncle's abuse. It's an icky subplot that doesn't add anything to the film.

Kevin shows up to daily therapy sessions with Dr. Karen Fletcher (Betty Buckley) as a flamboyant fashion designer name Barry. Karen has a theory that multiple personalities can actually create physiological changes in a person with this disorder. Kevin's various personalities keep talking about “the Beast” and we're constantly waiting to see how Casey's flashbacks, the significance of the sessions with Karen, and “the Beast” will all come together in a satisfying way. And if there's a fun twist, so why not. This is an M. Night Shyamalan film after all. Unfortunately nothing really comes together and the film unwisely turns to the supernatural to explain things that I never felt on board with. The story completely comes apart and instead of just going with it I felt far removed from anything I had been watching. McAvoy is good yes but for what? The story's weak ending is no justification for such a great performance. Casey's backstory fails to resonate and instead reeks of unwarranted exploration.


M. Night Shyamalan is a good filmmaker. I firmly believe that. “The Sixth Sense” is a masterpiece. Some will argue “Split” is his finest movie in years but that's mostly because it has a random reveal that many will argue is “cool” but, like the film itself, feels ultimately pointless.  GRADE: C+

Today, every year, thousands of pieces of Lange produced rolex replica on behalf of the highest quality gold or platinum watch 950. Fully equipped with an exclusive movement, carefully decorated and assembled by hand. Since 1994, Lange developed 54 watch replica rolex factory self movement, leadership and senior watch brand in the world. rolex replica The logo of the brand watches, such as in the general watch equipped with the first calendar display LANGE 1, with precise jumps for ZEITWERK, are Langer's representative.


wonderful issues altogether, you just received a new reader. What may you suggest about your submit that you just made some days ago? Any certain? gmail.com login


Everyone loves it when people come together and share views. Great blog, keep it up! yahoo login mail

visa for turkey from Canada said...

I am really enjoying the design and layout of your blog.visa for turkey from Canada. Complete the online application to Turkey form on the Turkish eVisa website and confirm your application. Within minutes.

Impressive! Thanks for this post. I appreciate your work. Keep going on. If USA citizen wants to come to India for the purpose of tourism and meeting their family and friends, so you can apply for India to USA tourist visa which is easy to get e-visa on email.

Wow.. Very informative article thanks for sharing please keep it up.. The Indian visa application system is fully online, you can apply for a visa through the India visa website with simple and easy steps.

Azerbaijan visa for US citizens said...

Appreciate for this post.. US citizens who wish to travel to Azerbaijan need to apply for Azerbaijan visa for US citizens through online visa application with 24/7 customer support.

Great job! I really like your work. Nicely described points here. The Turkish government provides electronic Turkey visa USA which is travel authorizations to United States citizens. It is for people who want to travel to Turkey without applying for a visa in advance and is different from a standard visa.

I read your article last night and it's so amazing. I have shared it with my friends. I hope you will publish more articles like this. People who are willing to travel to Turkey. They can apply for an electronic visa Turkey from the website. You need an internet connection and valid documents. Travelers can apply from anywhere in the world.