Belle of the Ball: Live Action “Beauty & the Beast” is Luscious & Fun, if a Bit Padded 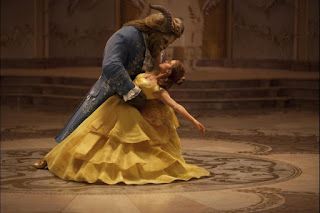 There definitely is something there that wasn't there before. And that's not necessarily the best thing. The groundbreaking 1991 animated musical hit “Beauty & the Beast,” hot off the heels of the equally iconic “The Little Mermaid,” set a new standard not only for Disney but for animated films in general. Clocking in at 84 minutes, the film was swift yet majestic, stunningly animated, and absolutely fun. The film was brilliant and remains so, but there really wasn't all that much substance behind it.

Enter a new era where classic Disney animated films get the live action treatment because now we have the technology to see dishes sing and dance. But with a new runtime of 129 minutes the glossy new Disney musical threatens to overstay its welcome. Filled with extra somewhat sub-par songs (only in comparison to the superior originals) and mildly unnecessary plot elements disguised as character development, “Beauty & the Beast” is a really fun movie with great performances, dazzling musical moments, and fun bursts of humor; though it might be a bit overstuffed for its own good. It's not quite as garish as the live action “Alice in Wonderland” but not as emotionally rewarding and visually lush as “The Jungle Book.” I have no qualms about recommending “Beauty & the Beast” to every single person who is excited as hell to see it.

We've sort of entered a new era for the movie musical. Directors are more interested in filling out their casts with great actors who can sing decently instead of decent actors who can sing great. And that's fine. Emma Watson, still hot off her longtime run in the Harry Potter films, stars here as Belle. She's the girl whose nose is always stuck in a book and her fellow villagers think she's a freak. Then there's the walking pile of testosterone Gaston (theater-trained Luke Evans who steals the show) who pines for her affection. Belle's father (Kevin Kline) unwittingly ends up locked in the castle of a monstrous Beast (Downton Abby's Dan Stevens), who is actually a handsome asshole prince who was cursed by an enchantress along with the rest of his servants; they're all threatened to stay as inanimate objects for eternity unless the Beast can learn to love and earn someone else's love in return (but we all know that). Belle, being the strong willed woman she is, defiantly replaces her father as the Beast's prisoner and so begins a tale as old as time in which a beautiful book smart townswoman learns to love the hideous hairy beast who's keeping her prisoner. The ick factor is almost more obvious in live action, but I digress.

Ninety-nine percent of the audience going to see “Beauty & the Beast” will already be completely familiar with the film's entire plot line. More importantly, how exactly are the songs? They are good but different. Tempered exceptions are beneficial here. They don't quite sound the same as the animated film and that's completely fine. The actors all have decent voices, they wouldn't have been cast otherwise. But technology isn't just used to make a clock and a candelabra come to life; they also help actors' voices sound better. Watson has a beautiful voice even if it's not that particularly impressive. Stevens doesn't get to do much singing as the Beast (he does get his own original song towards the end) but he's very good as well. The Be Our Guest sequence, like the animated original, is still the showstopping number and Gaston's song is still a really fun sequence as well.

Director Bill Condon knows how to make things familiar and fun and while the recognizable moments are spot on, it's the new elements that fail to conjure much excitement or interest. There's a somewhat boring sequence that finds Belle and Beast in Paris but it's over quickly enough. There's more backstory which is appreciated more than it's actually necessary. The animated film's characters are pretty one-note to begin with so it's obvious screenwriters Stephen Chbosky and Evan Spiliotopoulos tried their darnedest to give these characters three dimensions.


Overall “Beauty &  the Beast's" successes triumph over any failures. It's definitely middle of the road where Disney live action remakes are concerned. The cast is strong and the musical sequences are fun; I imagine many will be wiping away tears. I found myself not all that emotionally invested in the story (The film's two minute trailer is more emotionally rewarding in my opinion) but it was downright fun and entertaining even if it could have used a little bit of tightening up. The visual effects aren't nearly as impressive as last year's Oscar-winning “The Jungle Book” but that's fine; the filmmakers have turned an animated hit into a live action film that seemed like a completely daunting task and it's perfectly fine. Audiences are eating this up and I'm not surprised, it's a culinary cabaret.  GRADE: B

Buy replica Rado Coupole watches from our store. You are certain that you get the most of fake breitling you paid for in terms of quality and warranty. Many replica watches look similar enough to real ones that their differences can be mistaken as signs of a fake. Is there anyone who has not heard of replica watches sale? Well, it would really be amazing if you answer YES to this. The rolex replica sale may be cheap, but exercising caution and wisdom, like you do with most purchases is advised. Inspection of a tag heuer replica sale is required to have a feel of the craftsmanship and the reality of it being a rolex replica sale in the first place instead of being a toy replica that has been photographed or put up on the website.