The Working Dead: While Nothing Groundbreaking, “The Belko Experiment” is Disturbing, Exploitative Fun 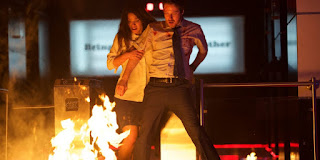 I've never seen “Battle Royale” so I can't bear witness to its disturbing quality, but as far as films about children murdering each other it must be a pretty messed up experience. The “kill or be killed” premise isn't something brand new. It's even more recently gone mainstream in the form of “The Hunger Games” series in which teenagers and children are forced to murder each other in a post-apocalyptic dystopian society. “The Belko Experiment” takes the “kill or be killed” premise into the office working environment. The film follows the employees of a Bogota, Columbia-based company as they're forced to play a deadly game by an unknown adversary. Cue people being shot, stabbed, and maimed in variously disturbing ways. And it's funny. That's because the guy behind this craziness is James Gunn who can go from horror such as “Dawn of the Dead” to quirky dark comedy like “Super” to populist summer blockbusters like “Guardians of the Galaxy.”

There was an old couple in the theater when I saw “The Belko Experiment” and I always wonder how certain people find their way into certain movies. Perhaps they saw “Spring Awakening” on Broadway and are big fans of Tony-winner John Gallagher Jr. who plays the likable Mike Milch. Perhaps they recall Tony Goldwyn (not cast by accident since his characters always seem to go to dark places) from his turn in the 1990 romantic classic “Ghost.” He plays CEO Barry Norris. Or, turning to television, perhaps they were big fans of “Scrubs,” as character actor John C. McGinley plays Wendell Dukes who constantly and creepily leers at Mike's girlfriend Leandra (Adria Arjona). There are other cliched characters including the friendly pothead, the friendly chubby lady, and the friendly gay guy. Maybe this couple was big fans of Australian director Greg McLean who gave us the fantastically creepy horror film “Wolf Creek.” I assume this cute elderly couple are just messed up people who enjoy exploitative graphic violence.

And that's exactly what the film is most concerned with. I think there's a point somewhere in Gunn's tight script about the corporate work life and the boring routine of the office workplace. It's an observation of how disturbing human behavior can be when in put in such a dire situation and pushed to the limits of survival. The film threatens to become almost too much to bear; in this current world the image of people being shot in the supposed safety of a work environment is almost too distressing. But the film finds a good balance of humor to balance out the darkness. McLean's film is almost unbearably suspenseful; it's so fantastically paced, there's hardly much room to breathe.


“The Belko Experiment” is fast-paced, violent, disturbing, and shamelessly ridiculous. It also makes you laugh despite the fact that it threatens to become too overwhelmingly dark. It will certainly be not everyone's idea of a good time at the movies. You're really just watching people be violently murdered for an hour and a half. And even if the premise isn't quite the most original, it provides a place for those of us willing to travel to the darkest recesses of the human mind. See it for the disturbing premise, stay for the death by tape dispenser.  GRADE: B+