While You Were Sleeping: “The Big Sick” is a Modern Romantic Comedy Classic 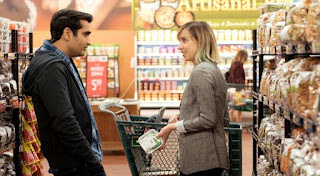 The romantic comedy has been a Hollywood staple since the invention of film. The genre has changed forms as much as it has just played by the rules. For every five or ten that are cliched-ridden messes, there's one that really tries to change the game. “The Big Sick,” which is semi-autobiographical, tells a fantastic American story and fundamentally human: it's about a Pakistani standup comedian who defies his traditional family (who are into the whole arranged marriage thing) by falling for a white woman. But certain events threaten to tear them apparent in ways they're completely unprepared for. Written by “Silicon Valley” star Kumail Nanjiani and his real-life wife Emily V. Gordon and directed by “Wet Hot American Summer” alum Michael Showalter, “The Big Sick” is a constantly engaging romantic comedy that takes its viewers through all the appropriate emotions; you'll laugh, you'll cry. I haven't been this emotionally invested in movie characters and their story in quite some time.

Kumail Nanjiani plays a version of him in “The Big Sick.” He's a somewhat struggling standup comedian who also works as an Uber driver in Chicago. Him and his fellow standup friends are ready to breakout and make a real living in the comedy world. Enter audience member Emily (Zoe Kazan) who catches Kumail's eye one night and they start a little fling even though Emily is busy with grad school and says she's not interesting in a relationship. Sometimes the heart wants what the heart wants. And they want each other. The problem is Kumail comes from a very traditional Muslim Pakistani family who is constantly setting him up with single, eligible Pakistani women. Think of it like “My Big Fat Pakistani Wedding.” Did I mention that Emily is a white girl and Kumail doesn't mention to his family that he's dating her. Meanwhile, Emily is psyched to have her parents meet Kumail. This is a complicated relationship and a sudden medical episode threatens to tear these lovebirds apart.

It's no spoiler that Emily ends up in a serious coma. The name of the movie is “The Big Sick.” So what could possibly happen in a romantic comedy when the leading lady ends up comatose for a majority of the run-time? Enter Emily's parents played by Holly Hunter and Ray Romano. Hunter is particularly outstanding- giving an Oscar worthy performance as more than just a grieving mother. The film takes a sudden turn when Kumail begins bonding with Emily's parents. Somehow you end up feeling like you're right there with Kumail, a part of Emily's family. The film functions by telling to amazing stories: one involves the stresses of dealing with a suddenly sick loved one, and the other is a story about a man at odds with the traditions of his well-meaning family. It's almost heartbreaking to see what Kumail is going through and it's extremely relatable no matter your race or religion.

But the film isn't quite the emotional drag I make it out to be. It's also brutally funny. Finding humor in the darkest of moments. Isn't that just how life is sometimes? The movie isn't afraid to push the envelope. Of course there are references to terrorism, ISIS, and 9/11. These are the times we're living in and filmmakers would be foolish to pretend this stuff doesn't exist. Showalter directs with assured precision and helps you feel connected to the characters. The script is witty and delightful and reflects the best of the genre, and has a lot to say about the current world we're living in. This Judd Apatow-produced dramedy is of Woody Allen level quality and, like the recent Amy Schumer hit “Trainwreck,” is another shining example of a big new star on the rise.  GRADE: A

And furthermore, it is one of the most replicated, making it easy to breitling replica find, with different models of the Cartier timepieces available in the market. If you are thinking of buying rolex replica sale, you should choose among their selections carefully, while some retailers sell only the highest quality replica watches uk, other retailers may not. Replica Cartier watches are also priced very reasonably (most of the time). While there are unreliable rolex replica sale, you will still be able to find replicas that are durable and of high quality like some of those sold on the replica watches internet. Cartier Ballon Bleu Replica are marketed because there are many people who want to have their own replica watches sale but can not buy it due to the high cost of the authentic ones.

Howdy! This is my first comment here so I just wanted to give a quick shout out and say I truly enjoy reading through your articles. Can you recommend any other blogs/websites/forums that go over the same topics? Thank you! noticias deal corcon

I’m curious to find out what blog platform you happen to be working with? I’m having some small security issues with my latest site and I would like to find something more safeguarded. Do you have any suggestions?   hadeel web