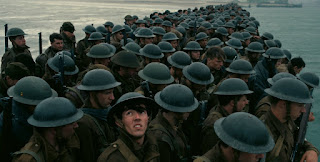 “Dunkirk” is an anomaly. Nothing like it truly exists and the war film has been a genre that's existed since the beginning of cinema. “Dunkirk” is a big-budget Hollywood experimental war film, released in the summer of all times, that doesn't rely on the American point-of-view (since the US hadn't entered the war yet), has little to no backstory or exposition, and it's all under two hours. It's one of the most thrilling, intense movie-going experiences I've had in my entire life. Christopher Nolan, once again making perfect use of IMAX cameras (much more so than "The Dark Knight Rises" or "Interstellar"), has crafted an immersive theater going experience (without distracting 3D) that puts you in the action of World War II that is a complete assault on your senses in the best way possible. He takes you to the air, the sea, and beach in a way never really seen before; it demands to be witnessed on the largest screen you can find.


Somehow “Dunkirk” is Christopher Nolan's simplest film and yet his most complex. It's simple in that it's short on runtime and doesn't take it's time give you any context or backstory. He drops you right into the action. Told from three points of view- the air, the sea, and the land- from various characters, the film plays its narrative by taking place over different periods of time. All the stuff on the land and beach follows a young, inexperienced soldier named Tommy (newcomer Fionn Whitehead) as he's chased by enemy fire to the beach in Dunkirk where thousands of other cornered soldiers are awaiting evacuation. Tommy's repeated attempts to get to a ship to get out of France keep failing as enemy fire makes evacuation more difficult. We then head to the sea where an elder civilian Mr. Dawson (Mark Rylance), his son Peter (Tom Glynn-Carney), and boathand George (Barry Keoghan) head out by naval order to help rescue stranded soldiers. They pickup a shell-shocked soldier played by Cillian Murphy. Meanwhile, Tom Hardy and his small group of spitfire pilots are in the sky fighting off the enemy in the air. Because nothing is quite so simple in a Christopher Nolan film, the film's narrative is purposefully non-linear, with each segment taking place at different times. It creates confusion to be sure, and requires the viewer to make sense of what they're seeing and how things fit together.


Anyone not seeing the film on the big screen is doing themselves a grave injustice. This is a film that was made to be seen on large format (preferably IMAX) movie screens. “Dunkirk” is not a film focused on dialogue or character development, those things are mostly irrelevant here on purpose. The film drops you into the chaos of World War II in a way most movies have before. Imagine the intense opening battle of “Saving Private Ryan” stretched to feature length on giant IMAX screens. Nolan's film doesn't focus so much on actual combat – and there is little to no actual onscreen violence – but the film is one of the most intense and visceral war films you're likely to ever see. The direction relies on sound and visuals (and little to no CGI) to tell its story and is very Hitchcockian in that regard. The film functions as a suspense thriller without ever being exploitative or misrepresenting the actual real life story. Most of the few characters we get to know have no real life counterparts so that the film doesn't get bogged down in historical accuracy though it's one of the most realistic war films of recent memory. Almost everything is practical from the thousands of extras to the planes, warships, and explosions. Nothing looks digital or fake because nothing really is. DP Hoyte Van Hoytema attached IMAX cameras were attached to real WWII airplanes giving the film an authenticity that has been unmatched. The cinematography is jaw-dropping. Functioning like a silent film, the sound design and music score are an integral part. Hans Zimmer's loud, mechanical equally-experimental driving score is bombastic and employs ticking sounds that help set the theme of time and place. The suspense is almost unbearable.


“Dunkirk” is unlike anything you'll see and may ever see in a movie theater. It's like the simple yet intense theatrical experience of “Gravity” with the unconventional, playful narrative of “Memento” or “Inception.” I can't stress enough how important it is to see on a huge screen. Christopher Nolan is the rare Hollywood filmmaker who truly believes in the theatrical experience. He remembers why we go to the movies in the first place. You have to admire a guy who makes a big budget experimental summer blockbuster. This isn't a regular war movie. There are no cliches. He takes you on a unique ride and it's 106 minutes of non-stop bombardment, chaos, and suspense. It's amazing that this film even exists in this digital world but I'm so glad it does; it's breathtaking.  GRADE: A
Posted by Chris at 12:09 AM

The bracelet does have a slight more polished finish but its still very replica watches in my eyes. Working chronographs on this rolex replica uk battery run movement. watches store should be a military hour I guess but its only market is a small ticking seconds hand, watches store is a stopwatch. The big replica watches hand has a more sweeping like motion compared to the small buy rolex watches chrono but it still ticks. Overall I think the dial looks good and very much Porsche Design like. Bracelet replica watches sale in a hidden clasp which I think should have been black plated too. Cant really see it but you know its there and its rolex replica sale plated stainless steel. Looks like a pretty fun everyday wear to me and my cousin is happy with it so thats where I get my replica watches on this piece. Check out some more pics and feel free to give me your thoughts on it.