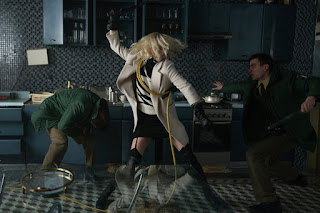 Gunplay. Chases. Double agents. Communism. A fetching Charlize Theron. We’ve all seen it before. “Atomic Blonde” doesn’t really add anything new to the spy thriller genre, but what it does right it does really well. It’s completely style over substance- it’s difficult to care much about anyone onscreen- but it features a few standout sequences which make it worth checking out. And the story is somewhat confusing in a way that makes it way too easy to want to tune out. Theron gives another great performance and the action scenes are directed flawlessly. But cool camerawork will only take a view so far after all.

How does one explain the plot of “Atomic Blonde” without droning on and on? Charlize Theron is Lorraine Broughton a British MI6 agent tasked with tracking down a list of Soviet agents hidden in a wrist watch that was initially in the hands of a murdered colleague. She’s sent to Berlin during the Cold War and the entire film is set during the collapse of the Berlin Wall. In fact, every time clips of real Berlin Wall footage was shown on TV screens I sort of wish I was watching a documentary about the tearing down of the Berlin Wall. This isn’t that movie. There’s lots of guns and fights and rather graphic deaths. Oh and Theron’s character is a lesbian – or is at least part of her cover- so let be that worth to you whatever it may be.

At some point my eyes began to glaze over as I was bombarded with stylish action scenes and heavy dialogue that just made the plot more muddled. I found myself not really caring about these people. There’s also James McAvoy as a British agent – he’s great in the role – but like most of the characters we don’t get to know much about them so it’s hard to root for anyone. The soundtrack is awesome and filled with delightful 80s pop tunes that match the beautiful neon-drenched scenery. But the real showstopper is a glorious long take action sequence which begins as a fight scene in a stairwell and ends with a car chase. Savvy viewers will spot the hidden edits but it’s no less impressively staged.

“Atomic Blond” is based on a graphic novel (“The Coldest City”) and that’s obvious. We’ve seen so many graphic novel adaptations it’s hard to keep track. They all sort of tend to feel the same after a while. The direction from David Leitch is impressive; he doesn’t always just follow the formula. And Kurt Johnstad’s script, even if it’s a big convoluted, offers a few decent twists and turns, though the flashback framing device has been done before and feels stale. I enjoyed the setting and the soundtrack. Theron is good as always.  Overall what we have here is a mixed bag and a film that prefers style over substance. I’m not completely surprised.  GRADE: B-

The rolex replica watches are no doubt very upright watches. They are very bright and shine watches. They are very wonderful accessories particularly for the ladies. Being a woman if you are finding some very hot and fake watches kinds of fashions for 2011, there should be no hesitation in saying to that tag heuer replica uk are the best ladies watches at the present time. They are reasonably cool and comfortable accessories for the fashion women. More interestingly, they enclose very robust and competitive logo designs which would surely make breitling replica on the women’s eyes. They are amazingly sensational, creative, and rolex replica watches. They are very fascinating and colorful watches. For that reason, with the usage of omega imitation watches you will be surely able to improve your gloomy moods and behaviors in a finest manner. Currently several omega watches companies are offering you swiss replica watches services worldwide in a professional and cost effective manner. Importantly we are offering you the best omega lady designer replica watches for 2011 all around the globe.