Boston Common: “Stronger” is a Powerful Tale of a Flawed, Reluctant Hero 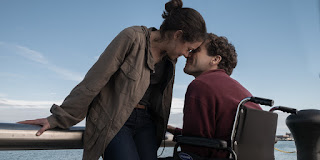 “Stronger” isn't so much about the Boston Marathon bombing as much as what it's like for a normal person to experience a terrible tragedy. David Gordon Green the director behind silly stoner comedies “Your Highness” and “Pineapple Express” and the upcoming “Halloween” reboot seems like the last person to be telling this story but his roots in independent dramas set the stage for a harrowing drama about a person who reluctantly became a “hero” in a time of tragedy. He's a flawed person and the film doesn't shy away from it. “Stronger” transcends your standard issue “based on a true story” drama by refusing to wallow in sentimentality and cliches and instead presents us with a serious character study about post-traumatic stress that is all the more powerful because the actors give complete, and moving performances.

Jeff Bauman was a regular guy when he showed up at the finish line of the Boston marathon to cheer on his his on and off again girlfriend. Then a bomb went off right next to him and his life changed forever. He lost his legs. And he was able to help identify the bomber. Very quickly, a photograph of him after the bombing became front page news. He became the face of the bombing. He was a hero because he survived. He was not only a victim of the bombing, but he was a victim of being thrust into the spotlight. He suffered for quite some time after the bombing only only having to deal with the loss of his legs but having to deal with constantly being thought of as a hero. It messed with his mind. And in “Stronger” Jake Gyllenhaal gives an outstanding performance as Jeff.

Through the magic of modern technology Jake's legs are wiped away onscreen and it's extremely convincing. There's even a joke at one point about how he's like Lt. Dan from “Forrest Gump.” His girlfriend Erin is played by Orphan Black's Tatiana Maslany and she also gives a fierce performance. It might be easy to dismiss Erin's characters as “reactive” since most of her scenes involve watching the hell that Jeff is going through. But the onscreen chemistry between Jake and Tatiana is palatable. They feel like regular people. The stand out supporting player certainly is Miranda Richardson as Jeff's working-class mom Patty. She's eccentric in that Bostonian way and reminds me a lot of what Melissa Leo was doing in “The Fighter.” In fact, maybe it's just the accents, but the film sort of reminded me of “The Fighter.” That film's wasn't so much about boxing as it was about a family. In that way “Stronger” isn't so much about the tragic marathon bombings. John Pollono's script is about one man's experience in the aftermath of it and how it affects him and his immediate family and friends.

I imagine it would be a lot of pressure to be the symbol of “Boston Strong.” Being thrust into the public eye when you never asked for it is a lot to deal with. Add having to learn to walk again without legs is something most people couldn't even fathom. Green's film is small and intimate. In a lot of ways it's the complete opposite of last year's Boston bombing film “Patriots Day” which functioned as a thriller. “Stronger” is more interested in getting into the mind of a reluctant hero than making any political statements. It's a wise move in a movie that surprisingly refuses to play it safe. Or maybe I'm just a sucker for a good Boston-set film.  GRADE: B+