A League of their Own: DC’s Big Screen Team-Up “Justice League” is Fine but Underwhelming 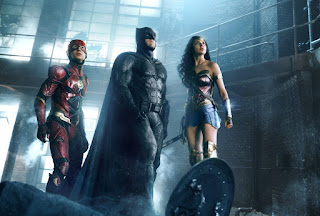 Full disclosure: If I’m being honest, I could take or leave the first big Marvel team-up “The Avengers;” I enjoyed it at the time, but has since receded from my memory. I can’t recall a single plot element or joke that made me laugh. I’d rather watch any of the other Marvel films. I’d rather watch “Wonder Woman.” I’m dumbfounded that people rank it so high in the Marvel Cinematic Universe. Released several months after the outstanding aforementioned “Wonder Woman” and practically days after the surprisingly fun retro-chic “Thor: Ragnarok,” “Justice League” easily feels disappointing in comparison but is nowhere near the trainwreck some have described. Have they never seen “Batman & Robin?” The thing that hurts “Justice League” the most is that “average” comic book films feel so slight and underwhelming when there are so many great ones already in existence. Having said that, there’s no reason someone can’t have an enjoyable experience with “Justice League” though it does feel much more like a product than the Marvel films do. The movie doesn’t feel depressing, overly long, or as self-serious as the previous DC outings and while some of the humor feels forced I’ll take what I can get when it comes to an already overcrowded marketplace full of caped crusaders.

One has to admire the courage it took to kill off Superman in “Batman v. Superman: Dawn of Justice.” Of course, no one will be surprised if the Man of Steel returns somehow. Superman has always been the weak link in this universe mostly because the filmmakers could never quite figure out how to make such a dated character feel relevant, even in such a shit-show of a world we currently live in. We already know Diana Prince/Wonder Woman (Gal Gadot) is great and she’s great here as well, teaming up with grizzly Bruce Wayne/Batman (Ben Affleck) who wasn’t as terrible as most strangely hoped last time around. Then there are the newbies who we got flash of (pun intended) in “BvS.” There’s Ezra Miller as Barry Allen/The Flash, injecting some fun but slightly awkward humor into the proceedings, Game of Thrones’ Jason Momoa, perfectly cast as a beastly Aquaman/Arthur Curry, and probably the least interesting being Ray Fisher’s Cyborg/Victor Stone.

And now the real disappointment and I’m not alone here. Does anyone care much about “Justice League’s” generic CGI villain Steppenwolf (voiced by Ciarán Hinds)? I’d much prefer to see a human performance. Of course, why would we need five of the world’s most super humans to defeat someone like, say, The Joker? You need a big, bad villain whose goal is total destruction of the human race and/or planet. I get it, it’s just not all that interesting.

It must be said that director Zack Synder still sort of feels like the thing that makes these films so uneventful. He has made some very good movies, most notably “Dawn of the Dead” and “Watchman,” so he’s not incapable. But “Wonder Woman” gave us a fresh perspective and a new eye. We need some new voices in the DC world. “Justice League” has suffered from rewrites and such and even “Avengers” helmer Joss Whedon was brought in to fix things up. Even the God himself couldn’t make this a perfect work of art. Bottom line: the film is fine, it’s entertaining, and it has finally reunited Danny Elfman and Batman. You could do a lot worse.  GRADE: B

It puts together quite an impressive array of components to build this pro-looking, stylish and high replica watches. They impart a unique flair to the rolex replica that will leave you finding it difficult to leave it back home. The chief selling point of the rolex replica sale is its sleek, yet strong design. The chrono sub-dials are well hidden within the face that tends to look on the larger side. It breitling replica uk grabs attention being both large and shiny and it replica watches uk shows that you mean business. Useful gimmicks are secondary. A comparatively simpler, classy yet bold style makes the fake breitling very well suited for light business formals and dress wear.