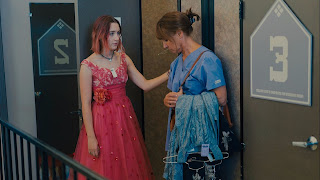 “Lady Bird” is, in fact, not a spinoff of last year’s first lady character study “Jackie.” When buzz for the film began whirling around the internet I mostly ignored it because what I assumed was a biopic of ‘Lady Bird’ Johnson didn’t appeal to me at all. This is not that film. The film is about typical suburban teenage life and strife, ie, I hate my life, I hate my town, I wanna get out of this place. Sound familiar? The film is headlined by a fantastic performance from two-time Oscar nominee Saoirse Ronan (whose name I still can’t spell without looking at her imdb page). “Lady Bird” certainly isn’t the first film to tackle the ins-and-outs of being seventeen but director Greta Gerwig’s portrait of teen life feels so authentic I’d be damned if it wasn’t a true life tale. The story focuses on one year in the life of a 12th grader named Lady Bird and her sometimes contentious relationship with her mother. From the moment Lady Bird first throws herself out of her mom’s moving vehicle you’re with her and the film 100%. It’s not based on a true story but in a way it’s based on all of our stories; it’s immediate and immediately engaging.

There’s nothing particularly flashy or eye-catching about the filmmaking in “Lady Bird.” Writer/director Greta Gerwig, known for her charismatic performances in smaller, indie films (everyone should see “Frances Ha”), makes an auspicious debut behind the camera. And that’s probably because the Lady Bird character is probably ingrained in Gerwig’s soul and you can feel it. While this is far from the first film to portray realistic teenagers and family dynamics (we got a great one last year even “The Edge of Seventeen”), Gerwig just gets everything so right here. The filmmaker certainly knows where the main character is coming from, Gerwig attended Catholic high school in Sacramento and went to college in New York. For all intends and purposes the director IS Lady Bird. And even if you don’t relate to her specifically, someone you know will definitely remind you of her.

Lady Bird is played by Saoirse Ronan who is quickly becoming one of Hollywood’s most talented young performers. The character is one of those rebellious, somewhat pretentious teen movie characters that is somehow immediately relatable. It’s a role actors would kill for. She doesn’t always do the most likable things (or the smartest things for that matter) but she feels genuine. She hangs out with her best friend Julie (Beanie Feldstein), has the hots for the cute guy in the school play (another outstanding Oscar-nominated young actor Lucas Hedges from last year’s “Manchester by the Sea”),, and has the occasional quarrel with her mother Marion (underrated character actress Laurie Metcalf). Lady Bird hates Sacramento and wants to attend college in New York but her mother insists they can’t afford it. She gets sarcastic commentary from her adopted older brother who can’t seem to escape his supermarket clerk career. Only her dad (played by playwright Tracy Letts) seems to get her. Oh and Lady Bird and Julie occasionally eat the church wafers as snacks between classes and I have the strangest feeling that Gerwig probably did that at least once.

The female-centered film is a fascinating slice of high school life that takes place in 2002 and successfully reflects some of my own experiences growing up in the early aughts. Those expecting some kind of shocking revelation or big plot twist will be sorely disappointed. The film and its screenplay function to bring well-drawn characters to life in a naturalistic way, not to wow you with expert cinematic trickery. The movie is way more interested in making you laugh or feel something. The film has a wickedly delightful sense of humor. It’s has some keen life observations to make, some really fun vignette-like moments, a great sense of identity, and an emotional core that is sure to resonate with any adult who has ever been a teenager. So, essentially, everyone.  GRADE: A-